The number of active job adverts across the UK has remained between 1,600,000 and just under 2,08,000,000 since early June. In the week of 22-28 August, active job adverts hit a new high for 2022 of 2.08 million, according to the Recruitment & Employment Confederation (REC)’s latest Labour Market Tracker.

Across the UK, labour and skills shortages mean jobs are taking longer to fill – meaning that postings stay active for longer.

“A surge in new postings in late August is the result of recruitment restarting as people return from holidays, combined with preparation for the Christmas peak in manufacturing and logistics. It is still a good time to be looking for a job – the number of active job vacancies reflects a shortage of candidates for many key roles. That is why businesses who want to hire need to think carefully about their approach, relying on advice and support from REC members as experts in the field.

"The incoming Prime Minister and their Cabinet should prioritise the economy. That means addressing shortages by working with business to develop a workforce strategy that can support growth. There are some quick wins that could help – reforming the Apprenticeship Levy to enable more people to train, focussing on more effective support into work for those who are currently inactive, and increased numbers and longer work visas for key sectors. Effectively protecting small businesses from enormous increases in the uncapped price of energy is also vital.” 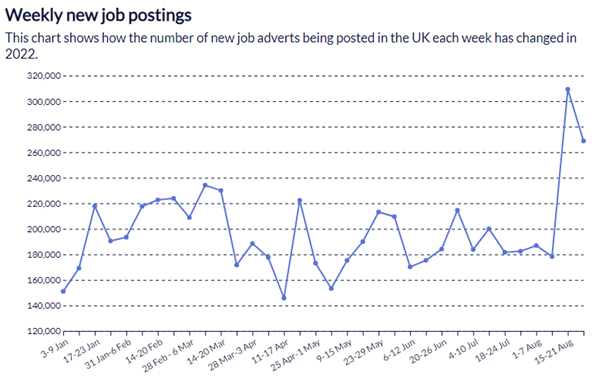 Lat week the majority of occupations in the UK showed significant increases in job adverts. The most notable were tyre, exhaust and windscreen fitters (+24.1%), photographers (+23.4%), and veterinary nurses (+23.3%).

All regions in the UK saw substantial growth in job postings in the week of 22-28 August, with four of the top ten hiring hotspots in West Midlands. The top three local area with the highest increase in job adverts was Worcestershire (+24.1%), followed by Sandwell (+23.3%), and Telford and Wrekin (+22.3%).