Recruitment trends were mixed in October, with a renewed fall in permanent placements contrasting with a sharper increase in temp billings. According to recruitment consultancies, greater uncertainty over the outlook amid rising COVID-19 cases weighed on hiring activity, with firms often preferring to recruit short-term staff. 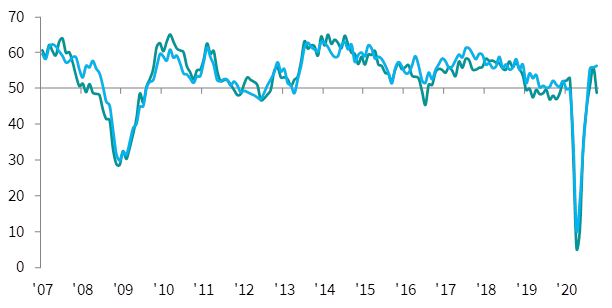 October survey data also pointed to a renewed drop in overall vacancies across the UK, albeit one that was only modest. The reduction was driven by reduced demand for permanent workers, as temporary vacancies rose for the third month in a row.

The supply of labour continued to expand sharply in October, despite the rate of growth easing to a five-month low. The availability of both permanent and temporary staff continued to rise at historically marked rates amid widespread reports of redundancies as well as concerns around job security.

A combination of rising candidate numbers and reduced client budgets contributed to further falls in starting pay at the start of the fourth quarter. Permanent starters' salaries and temp wages both fell markedly, with the rates of decline quickening since September.

Trends were mixed across the four English regions monitored by the survey. Growth of permanent placements in the Midlands and the North of England was offset by falls in the South of England and London.

As has been the case in the past three months, temp billings rose across all four monitored English regions bar London at the start of the fourth quarter.

Private sector vacancies rose further in October. Permanent roles expanded only slightly, however, contrasting with a sharp increase in temporary positions. In the public sector, demand fell for both permanent and temporary workers, with the former noting the sharper rate of decline.

Demand for permanent workers fell across six of the ten monitored job sectors in October. Retail and Hotel & Catering saw by far the steepest falls in vacancies. Meanwhile, IT & Computing saw the strongest rise in permanent staff demand.

The steepest increase in short-term vacancies was once again seen in Blue Collar in October, followed by Nursing/Medical/Care. Of the five sectors to note reduced demand for temp staff, the most marked falls were seen in Hotel & Catering and Retail.

“With a reluctance to recruit permanent staff and a big increase in people available for work, the impending lockdown puts the UK jobs market in a precarious position.

“While the furlough scheme extension may give a brief respite, it will fuel economic uncertainty and further dampen prospects for jobseekers, hitting hiring activity hard.

“The Government needs to ensure it offers enough financial support to UK business and opportunities for jobseekers to upskill as we continue to navigate through this crisis.”

“October brought a dose of realism after a quick economic bounce in the summer. While a new England-wide lockdown starts this week, similar restrictions were already in force in much of the UK last month. These figures show that hiring was still going on – and we believe that firms are better prepared to trade through these new restrictions than they were in March. Nevertheless, the outlook remains uncertain, and concerning. We face a challenging winter and temporary work will be a vital tool for keeping businesses going and people in work. All businesses are looking to Government to use the lockdown wisely and provide the Test and Trace system, vaccine and economic support that firms will need if they are to drive our recovery in 2021."