Glassdoor survey examines resignation ‘tipping points’ and how they vary by age, gender and location throughout the country.

January is the month when employees are most likely to think about changing jobs1, with almost one in five (18 per cent) citing this as the most popular month. A survey by Glassdoor, a jobs and recruitment marketplace, explores what the tipping points were before employees handed in their resignation. The survey, conducted among more than 1,000 UK employees2, finds that the number one reason why employees left a job during their career is money. In fact, more than one in three (35 percent) employees said the main factor behind the decision to resign was a low salary. Of that total, the highest demographic leaving due to a lack of pay were not those with a plethora of experience or bargaining power, but in fact the youngest section of the UK workforce, with a high 44 percent of 16-24 year olds doing so.

Among other reasons employees selected as major factors why they have resigned from an employer, more than one in five (23 percent) noted job tenure as they had been with the same employer for a long time and needed a new challenge. Monotonous or boring work (22 percent), job location or length of commute (20 percent), and disapproval of their boss or line manager (18 percent) rounded out the top five reasons employees resigned. 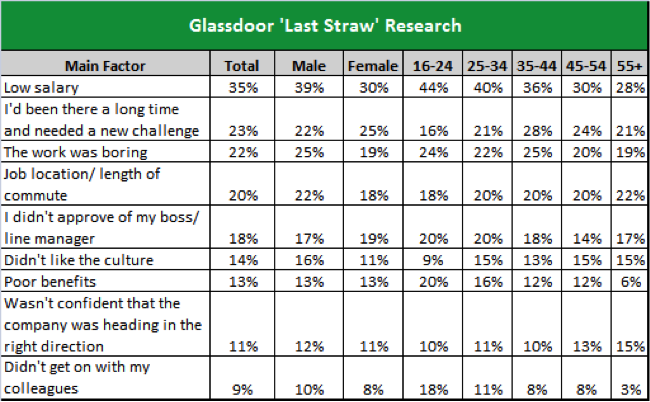 While the survey reveals that some of the biggest reasons for resignation tended to be consistent across the ages, it is interesting to note that those 55 years or older (22 percent) note that job location and the length of commute is more important than compared to their younger counterparts as just 18 percent of those 16 to 24 years old cite this as a reason for a voluntary exit. Also worth noting is that when it comes to low salary as a reason to resign, 44 percent of those 16-24 years old say this is why they resigned compared to 28 percent of those 55 years or older.

Nearly one in ten (9 percent) of those surveyed cited relationships with colleagues as a reason for resignation during their career. However this camaraderie is clearly far more important for younger workers as 18 percent of 16-24 year olds rank this as a reason for leaving a past employer.

Jon Ingham, Glassdoor Career and Workplace Expert said: “Understanding what causes employees to leave a company is beneficial to both the job seeker and the employer. For job seekers, this survey in particular, offers an important reminder to research a company before applying or accepting a job offer to understand what keeps current and even former employees satisfied and what would or did cause them to resign. For employers, understanding reasons for resignation both across the country, at competitors and within your own company can help in evaluating and improving recruiting and retention efforts.”

Where are some of the highest paying UK graduate jobs?

1 Online survey amongst 2,000 employed UK adults who have resigned from a job; Fieldwork carried out between 4-10 August, 2015 by OnePoll; 18% of respondents said that January is the month that they were most likely to think about changing jobs.

2  Glassdoor’s study of 1,139 UK employees was conducted online within Great Britain by Harris Interactive on behalf of Glassdoor from 15 – 19 June, 2015.

Glassdoor is the most transparent jobs and recruiting marketplace that is changing how people search for jobs and how companies recruit top talent. Glassdoor combines free and anonymous reviews, ratings and salary content with job listings to help job seekers find the best jobs quickly and address critical questions that come up during the job search, application, interview and negotiation phases of employment. For employers, Glassdoor offers recruiting and employer branding solutions to help attract high-quality candidates at a fraction of the cost of other channels. Glassdoor, which has nearly 30 million members and content from more than 190 countries, operates one of the most popular job apps on iOS and Android. The company launched in 2008 and has raised approximately $160 million from Google Capital, Tiger Global, Benchmark, Battery Ventures, Sutter Hill Ventures, DAG Ventures, Dragoneer Investment Group, and others.

Glassdoor.com is a registered trademark of Glassdoor, Inc.