UK vacancy growth is powering ahead, with the number of advertised job vacancies across the country rising 14% in the past year, according to the latest UK Job Market Report from Adzuna.co.uk.

Overall the UK jobs market improved in January, with a steady increase in the number of advertised vacancies. There were 768,104 vacancies in total, a 14% increase from the previous year, and a 3% increase compared to December.

The growth in vacancies has been boosted by a dramatic increase in manufacturing and engineering sector jobs. Helped by a particularly strong recovery in Britain’s car industry and a growing trend for re-shoring production back to the UK, vacancies in the manufacturing sector, for example, have tripled over the past year.

Andrew Hunter, co-founder of Adzuna, explains: “Manufacturing will play a key role in the rejuvenation of the British economy. It will help to increase the productivity of the country’s labour force, and help us catch up with our overseas competitors. The Bank of England has cited that greater economic productivity is needed to validate wage expectations, and manufacturing is one of the key vehicles to drive this forward.”

“At the World Economic Forum in Davos, David Cameron pledged to bring production back to Britain, highlighting manufacturing as an agenda forming topic for the Coalition.  Encouraging British businesses to bring their production process home, and building a reputation for quality exports, will help narrow the productivity gap, which will eventually filter through into a pick-up in real-wages.”

Manufacturing currently accounts for over 10% of the UK’s gross value and employs around 2.5 million people around the country. It accounts for more than half of the UK’s exports and around three quarters of the country’s business research and development.[1] New orders across the sector increased by a third in the three months to January[2] as exports increased in volume.

Growth in the UK’s car industry has helped to drive the number of advertised vacancies in the manufacturing sector to 10,012 in January 2014 – triple the number advertised in January 2013. Britain built more than 1.5m cars in 2013, the highest total since 2007, spurring experts to predict that UK car production will surpass 1970 record levels by 2017.[3]

Nissan, the UK’s largest car manufacturer, started production of the new Qashqai at its Sunderland factory in January 2014, where more than 7,000 people are now employed. Crossrail has provided further opportunity for new vehicle-production in the UK. Bombardier has won a contract to produce the trains for the project at its Derby factory, as well as being tasked with building a train depot at Old Oak Common in west London. 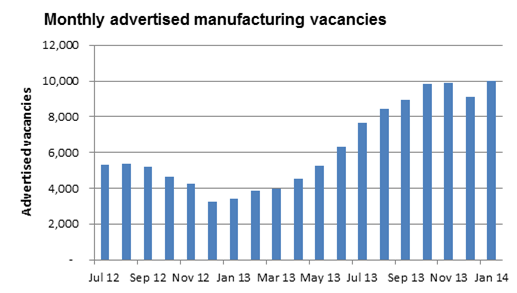 The manufacturing recovery is also speeding up as a result of the growing trend among British businesses for re-shoring – bringing production back to the UK. Since 2011, about 1,500 offshore manufacturing jobs have been moved back to the UK.[4]  This homeward migration is set to continue as new technologies help the UK to become a more competitive production centre. This ‘third industrial revolution’ is reducing the need for manual labour – traditionally sourced overseas – and increasing demand for highly skilled designers and engineers.[5]

Andrew Hunter, co-founder of Adzuna, comments: “While the booming car industry is fuelling vacancy growth around the UK, the real future of the UK’s manufacturing industry lies in new technology. Manufacturing techniques such as 3D printing could remove the need for many elements in supply chains, bringing large parts of production back to the UK and increase demand for skilled labour in the industry.”

A positive overall picture, but wages are still flat

While advertised vacancies grow, the salary slide has continued. The average advertised salary fell to a 17-month low of £32,011 in January. Compared to January 2013, salaries have fallen 4.6%, equal to a drop in real wages of £2,181.

Andrew Hunter, co-founder of Adzuna, explains: “Unemployment is far lower than a year ago, and the number of options available to jobseekers has grown tremendously. If advertised vacancies continue to grow at the current rate, we anticipate the number of available jobs easily breaking through the 800,000 barrier on average in February.”

Competition for vacancies has become even more intense in some Northern cities. In Salford and Rochdale, competition for jobs rose by over 18% month-on-month.

Andrew Hunter comments: “It’s vital that government initiatives attempt to bridge the gaping North-South split in the jobs market. Encouraging manufacturing will have a positive effect on the whole economy, but it could further separate North from South. The North is home to British car manufacturing, and a collection of Jaguar Land Rover production plants are based in the Midlands. But our high-tech manufacturing plants are clustered in the South, with Cambridge and Guildford two key epicentres. It is this type of highly skilled manufacturing which we are re-shoring back to Britain. Once again, it will be the South that benefits the most.”

[1] Government Office for Science, “Future of Manufacturing: A New Era of Opportunity and Challenge for the UK”, 2013