Can Britain face its fears? 1 in 3 employees would reject their dream job if it meant facing biggest fear

Jobsite presented more than 2,000 GB employees with twelve of the most commonly held phobias, asking them to rate their fear from being ‘very afraid’ to ‘not at all’.

Public speaking rises to the top, pipping both heights (65%) and social situations (37%) as the nation’s number one fear.[1]

With as many as 67% ‘shunning the centre stage’ as they admit their fear of public speaking and a just under a quarter (23%) admitting to being ‘very afraid’ of it. These latest results show that despite being considered by most employers a necessary skill in the workplace, presenting in front of our peers is a daunting challenge for most of us. 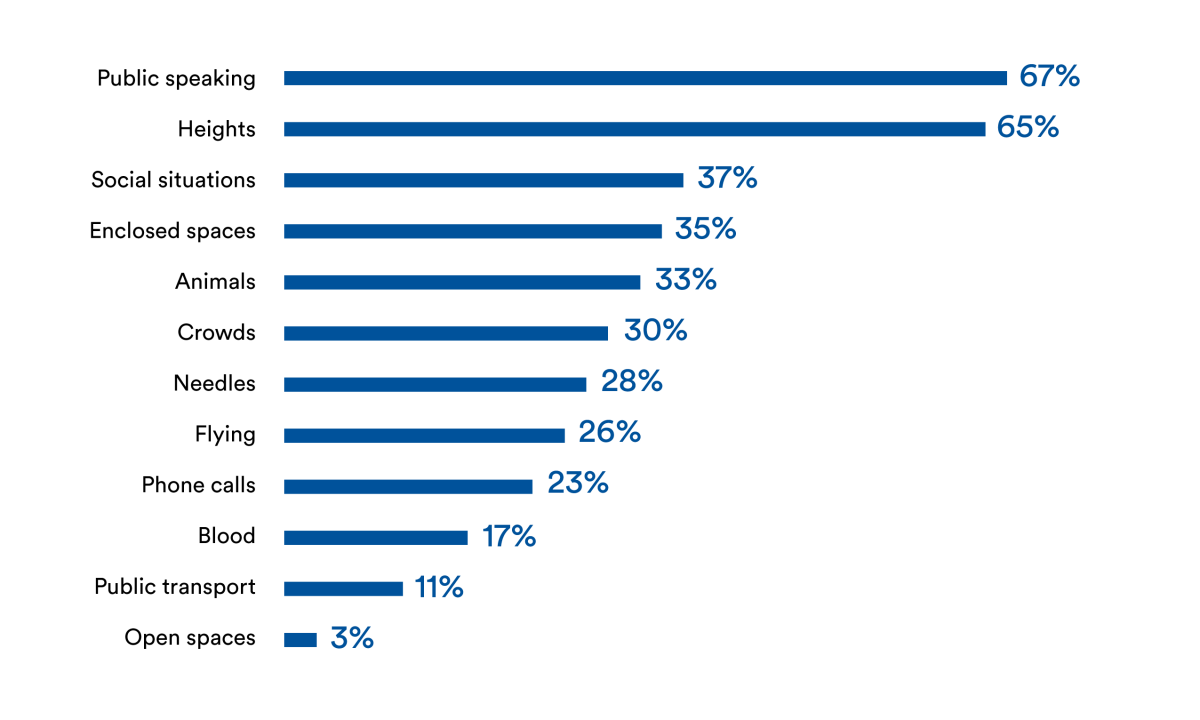 Jobsite recently spoke to five anonymous employees to find out more about how their fears and phobias have affected their lives – and careers.

Dan, a 38-year-old Dentist has suffered from a fear of public speaking since he was a child.

Dan describes himself as having been ‘a gibbering wreck’ in interview situations. His symptoms are ‘‘… a racing heart, racing brain, sweaty!’’

Dan believes his fear has impacted on past career opportunities ‘’I used to beat myself up that I couldn't sell myself well. So, I missed a few opportunities.’’

Dan has worked hard to reduce the effects of his fears but admits ‘‘I have half-overcome my phobia… It’s still uncomfortable for me’’.

Heights continue to remain a towering fear for a number of GB employees, with 65% of respondents saying they endure some degree of acrophobia or ‘vertigo’.

Kate, 56 is a former stage manager who used to have to face her fear of heights daily as part of her job:

“I have a horrible fear of heights… It affected work when I was a stage manager - there was a lot of ladder climbing and, worse still, climbing tallescopes… I shook so much my fingers could barely fashion a strong enough knot to hold the light… it was a whole-body shake – not confined to arms or legs. It was, basically, unsafe for me to do that part of the job.’’

Sadly, Kate has never overcome her phobia. ‘‘I avoid situations I can’t handle’’ she says ‘’It meant I missed out on some fun on holidays with my kids when they were young’’.

Dan and Kate are by no means alone, further examples uncovered by the today’s report underline both the variety and seriousness of the situation that currently affects up to 10 million people in the UK alone.

Today’s figures further reveal that our changing relationship with technology is having an impact on our social and professional behaviour.
The under-35s generation of employees is now almost three times as likely (32%) as those over the age of 55 (12%) to fear a verbal phone conversation with a stranger.

Fear of Fear Itself?

Over a third, (39%) of those surveyed would go so far as to reject their dream job if meant coming face to face with their biggest fear. With a further 14% saying that their fears have had a negative impact on their professional career. This is a serious issue and one that requires due thought and consideration in the workplace.

The results also suggest that many are choosing to keep their fears to themselves, with only 2% having ever spoken to their HR teams about their fears and with as few as 7% ever choosing to talk to their manager.

‘‘Today’s findings shine a light on an issue that many are sure to be aware of but understandably reluctant to talk about.

Few of us like to admit when we’re afraid, yet it is something that we all experience at some time in our lives. Whilst we may believe our personal fears are best kept private, we might not be aware of how it impacts on our confidence at work or what we can do about it?

I would encourage all employees to speak openly and honestly about their fears and anxieties that affect them in the workplace. Organisations can help encourage this by raising awareness of the support networks on offer and provide a confidential and safe route for staff to raise personal issues.

Workplaces, where staff feel comfortable enough to express themselves and can work successfully towards overcoming their fears and phobias, have the potential to make a lasting positive impact on employee’s lives.’’

For further stories from individuals coping with their phobias in the workplace and additional advice from Stephen Buckley, Head of Information at Mind UK, visit: - https://www.jobsite.co.uk/worklife/fears-and-phobias

EnhancedJobsite.co.ukView profile
Keep up to date with industry news