The year-to-date UK vacancies for 2020 were processed by an exponential smoothing algorithm, which produced a 15-week forecast.

The year-to-date UK vacancies for 2020 were processed by an exponential smoothing algorithm, which produced a 15-week forecast. The predicted values are a statistical continuation of the historical data and include confidence bands for the predictions at each point in time. The model does not predict or attempt to account for externalities such as changes to government policy, but instead relies solely on the historic data.

The table above shows the variance in hiring activity at 3 key points of the 2020 - January (pre-pandemic), May (2020 hiring low point) and October (latest hiring data)

Andrew Hunter, co-founder of Adzuna, comments: “I’m feeling increasingly optimistic that, after a dreadful spring and summer for the U.K job market, we are beginning to see a sustained recovery in hiring. There are definitely tough times ahead - we anticipate unemployment to significantly worsen as we move into winter, the job market will become more competitive and it’s clear that many sectors are keeping a lid on hiring while we battle the second wave of the virus. Confidence is key to getting Britain hiring again, and that will come from keeping the virus at bay, a strengthening economy and continued government support for our businesses big and small.”

Logistics & Warehouse, Manufacturing & Cleaning jobs are now in positive territory - hiring rates in these sectors are now above pre-pandemic levels. There are now over 60,000 live logistics & warehouse jobs being advertised across Britain, the most we’ve seen in a single month since we started collecting job market data 10 years ago. The autumn looks bleak for travel & hospitality jobseekers (-63%), Graduates (-59%) and Consultants/Freelancers (-57%).

The table above shows the % of job vacancies advertised in the U.K October 2020 vs. the pre-pandemic levels of January 2020 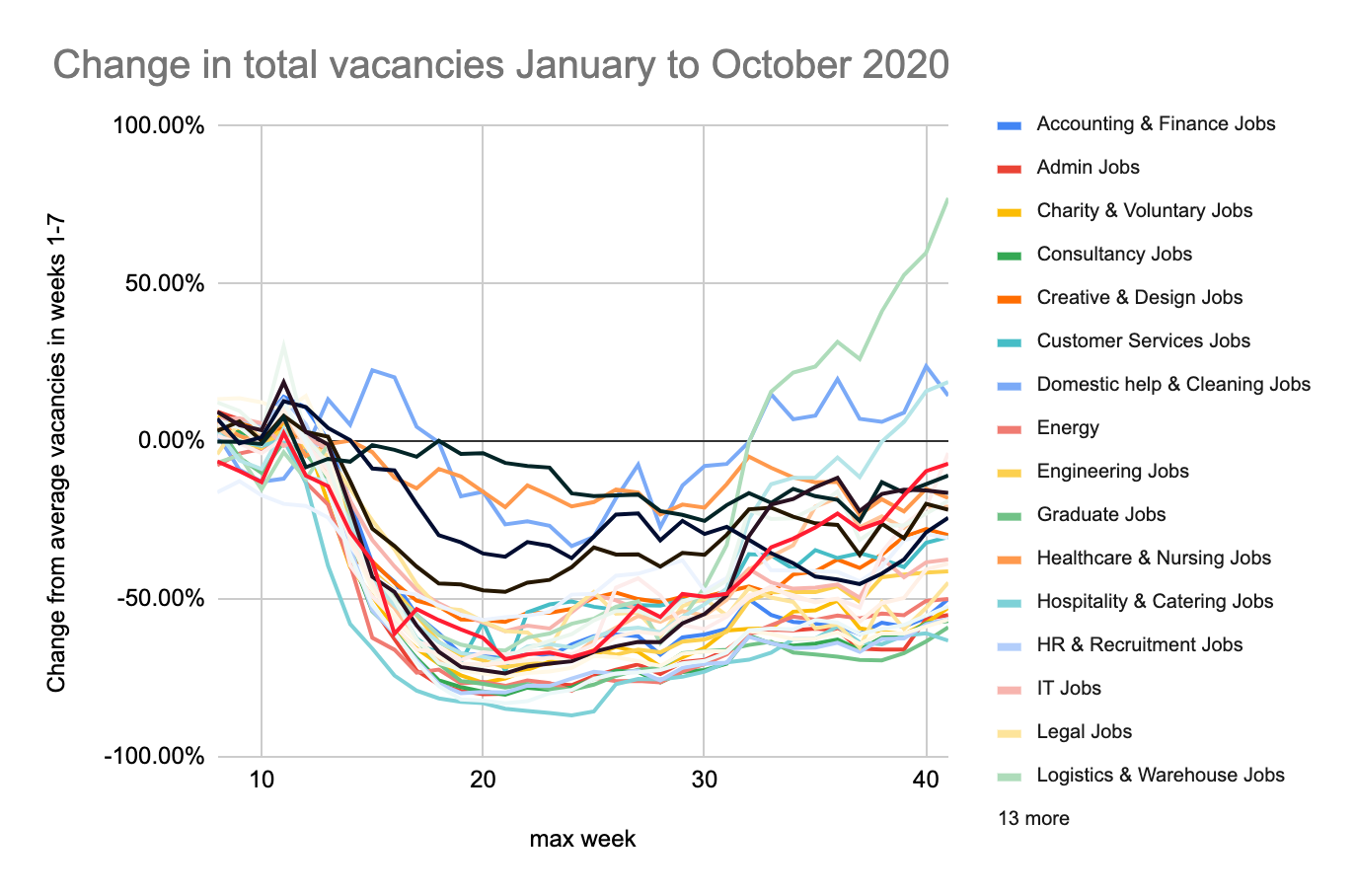 Andrew Hunter, co-founder of Adzuna, comments: “Hiring activity could be back to normal as early as January 2021, but make no mistake, we will see a very different jobs market emerge into the post-pandemic world. The recovery has been led by the handful of sectors boosted by the pandemic. Logistics & Warehouse jobs are up 77% since the start of the year, Manufacturing jobs have grown by a fifth, and key worker roles like Healthcare & Nursing and Social Care are continually hiring. But these growth areas sit in stark contrast to sectors like Hospitality & Catering, where the recovery has ground to a halt over recent months and hiring activity is stuck around 60% below normal. The wave of new UK restrictions, including the curfew, could cause these sectors to backtrack further and we expect Hospitality & Catering hiring activity to decline to 75% below normal levels by late spring and into the summer of 2021. Similarly, Travel looks stuck in the mud with no signs of imminent recovery. There will be a knock-on effect on workers in these areas and we expect to see huge movement between jobs as workers look to migrate from fading sectors to flourishing sectors.”

BasicAdzunaView profile
Keep up to date with industry news