The outbreak of Coronavirus Disease 2019 (COVID-19) had a detrimental impact on staff recruitment across the UK in March. The latest KPMG and REC, UK Report on Jobs survey signalled that permanent placements and temp billings both fell at the steepest rates since 2009 as firms cancelled or postponed plans to take on new staff.

The outbreak of Coronavirus Disease 2019 (COVID-19) had a detrimental impact on staff recruitment across the UK in March. The latest KPMG and REC, UK Report on Jobs survey signalled that permanent placements and temp billings both fell at the steepest rates since 2009 as firms cancelled or postponed plans to take on new staff.

Great uncertainty over the outlook underpinned the first reduction in overall vacancies for over a decade. Weaker demand for staff also led to a softening of pay pressures, with both permanent and temporary pay rising at slower rates.

The availability of staff continued to decline, but at the weakest rate since mid-2013 amid reports of increased redundancies.

Quickest drop in recruitment activity since 2009

After rising in the prior three months, permanent staff placements declined sharply in March, with the rate of reduction the sharpest since February 2009. Panel members cited the COVID-19 pandemic had led many clients to cancel or postpone hiring decisions. Temp billings were also hit, with a combination of the virus and pending IR35 policy changes leading to the quickest reduction in billings for 11 years. 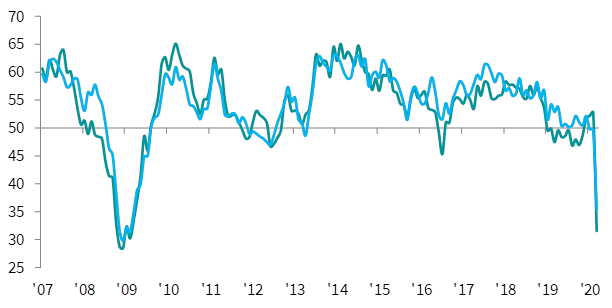 Demand for staff falls for first time in over a decade

Vacancy trends also deteriorated during March as the pandemic hit firms' appetite for staff. Demand for both permanent and temporary workers fell for the first time since the global financial crisis in 2009. Permanent staff vacancies fell at a quicker pace than temporary job openings, but rates of contraction were mild in both cases.

Recruitment consultancies signalled only a mild drop in candidate availability at the end of the first quarter, as there were some reports of redundancies due to COVID-19. Notably, permanent staff supply fell at the softest pace since June 2013, while temp candidate numbers expanded at the quickest rate since July 2012.

The increasingly uncertain outlook and reduced demand for staff weighed on pay growth during March. Starting salaries rose at the weakest pace since July 2016, while temporary wage inflation eased to its slowest for just over seven years.

Substantial reductions in temporary billings were seen across all monitored English regions. The steepest decline was in London, followed by the Midlands.

Permanent staff demand declined across eight of the ten monitored job categories at the end of the first quarter, led by Retail and Hotel & Catering. Nursing/Medical/Care and Engineering were the only sectors to record higher vacancies.

Only two monitored job categories posted higher levels of demand for temporary staff in March; Nursing/Medical/Care and Blue Collar. The steepest reductions in short-term vacancies were meanwhile seen in Retail and IT & Computing.

“Unsurprisingly, COVID-19 has already impacted the UK jobs market with recruitment activity falling away as uncertainty grips the nation.

“Firms are cancelling or postponing hiring decisions although, as you would expect, the demand for temporary healthcare professionals and manual labour workers saw a significant uptick.

“UK business needs to do what it can to adapt and survive this pandemic - and be able to emerge in the best position possible to ramp up once the crisis comes to an end.”

“The coronavirus pandemic has put the labour market on pause. It does mean massive disruption in the short term, but we need to remember that this has to be done in order to protect businesses and save lives.

“What we should be concerned about is how we stop that short-term disruption becoming longer-term economic depression. To do that we need to maintain employment levels as much as possible. Businesses in high-cashflow sectors like recruitment and hospitality need to be able to access government support much more quickly than they currently can, or they will not be able to afford to furlough their workers. This and other measures like government covering statutory sick pay for all firms will help people and firms to stay afloat now, and help the economy bounce back once the crisis is over.”

The full report is here