After weeks of sustained growth, there was a total of 1.63 million active job adverts in the UK in the first week of June

After weeks of sustained growth, there was a total of 1.63 million active job adverts in the UK in the first week of June, according to the Recruitment & Employment Confederation (REC)’s Jobs Recovery Tracker. This is 300,000 more than three months earlier and around the same level as early March 2020, before the first coronavirus lockdown came into effect.

Recent weeks have also seen record numbers of new job adverts being posted online. The week of 17-23 May saw 224,000 new postings, the highest for any week since the pandemic began. This was followed by 208,000 in the last week of May, the third highest weekly figure.

With the first week of June containing a Bank Holiday and many schools being on half-term holidays, and parents taking some time off, the number of job adverts dropped to 156,000. This remains a relatively high figure when set it in context of the past 15 months. There are increasing worries from employers about a shortage of candidates for jobs, as the strong hiring trend continues, in spite of concerns about the Delta variant of COVID-19.

“Data for the past month shows hiring in the UK recovering to normal levels, though there remain some differences between sectors and local areas. As pandemic restrictions have lifted, we have seen an explosion in job vacancies as companies rush to hire ahead of re-opening. Data from last week shows there has been a slight drop-off, perhaps driven by the Bank Holiday and school half-terms, but make no mistake – the jobs market is still more active than we have seen in 18 months.

“Employers do have some concerns about the rise in COVID cases, and we’ll have to wait to see whether that delays the final stage of re-opening. But by far their biggest worry right now is the shortage of candidates for jobs. The pandemic has made existing skill and labour shortages in the UK worse. Governments and business need to work together to ensure access to training opportunities and unemployment support so that there are pathways for everyone into growing sectors.” 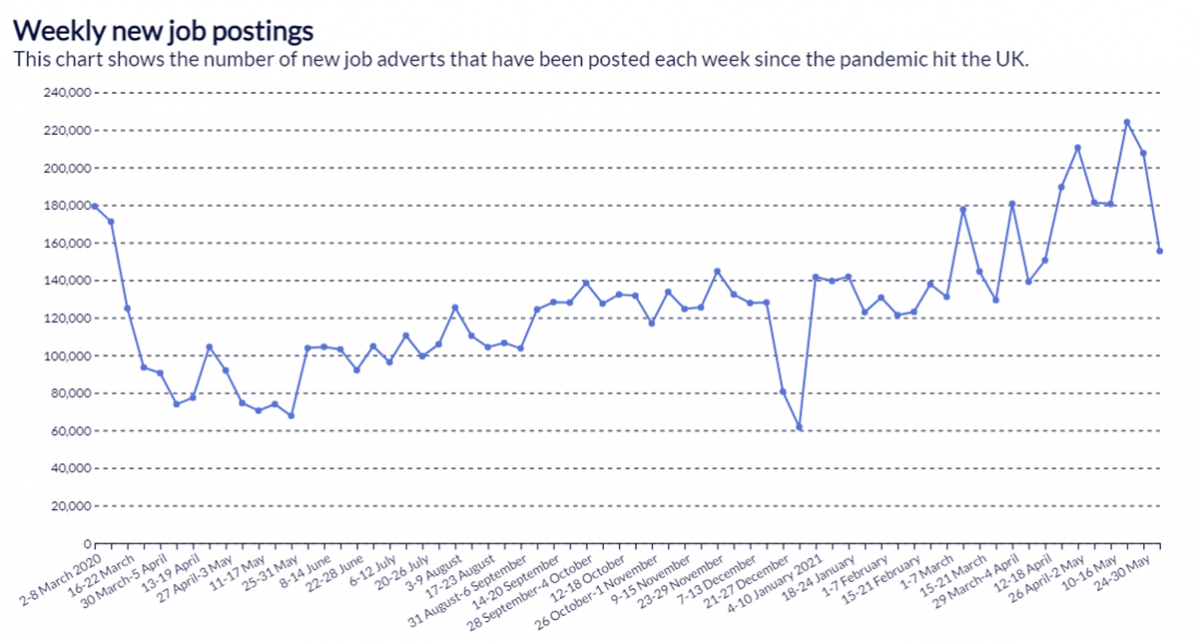 Teaching and other educational professionals (+17.8%) was the occupation with the highest weekly increase in active job postings in the first week of June. This is likely to reflect seasonal demand, as teachers moving schools in September have to resign by 31 May. There was also growth in adverts for other skilled roles such as welders (+6.6%), metal working machine operatives (+3.7%) and other skilled trades (+3.5%). Demand for bar staff continued to rise (+4.0%) as more people returned to pubs and restaurants.

This increased demand for skilled workers has higlighted the ongoing skills shortages in the UK economy. It is essential that both the government and employers work together to address and resolve the issue, so it doesn’t threaten the UK’s recovery in the coming months and years.

At a local level, the top hiring hotspot in the beginning of June was Thurrock (+26.7%), which saw high numbers of adverts for sales account managers, warehousing roles and van drivers. Drivers is an area of particular shortage across the UK right now, and government must work with the logistics and staffing industries to avoid a crisis later in the summer.

Other areas of the UK saw marginal increases in job postings, but six of the top ten areas for growth were in Scotland. Na h-Eileanan Siar (+4.0%) was second overall, followed by East Aryshire (+1.6%), Perth and Kinross and Stirling (+0.9%) and City of Edinburgh (+0.8%).