What a Way to Make a Living: Workers Rate Their Relationship with Their Boss at Only 6.6/10, Survey Reveals

If you find yourself arriving home after a long day at work only to spend a solid 10 minutes ranting about your boss, you’re not alone. A new study has revealed that on average, British employees rate their relationship with their employer at only 6.6/10.

If you find yourself arriving home after a long day at work only to spend a solid 10 minutes ranting about your boss, you’re not alone. A new study has revealed that on average, British employees rate their relationship with their employer at only 6.6/10.

The research, conducted by leading background checking technology experts, PASS, found striking regional variations: when compared across the UK, the study found that employees in the South West scored their relationships highest in the country with an overall rating of 7 out of 10. Opposingly, those in the North West voted these connections as just 6 out of 10, the lowest ranking in the UK.

Employers who were most confident about their working relationships were in Northern Ireland, (8.2 out of 10), whilst those who were least confident in their morale boosting skills were South Westerners, who rated their relationships as just 6.3 out of 10.

To see how the rest of the UK compares, check out PASS’s interactive map here: passtechnology.com/campaign/pass-harmony/index.html 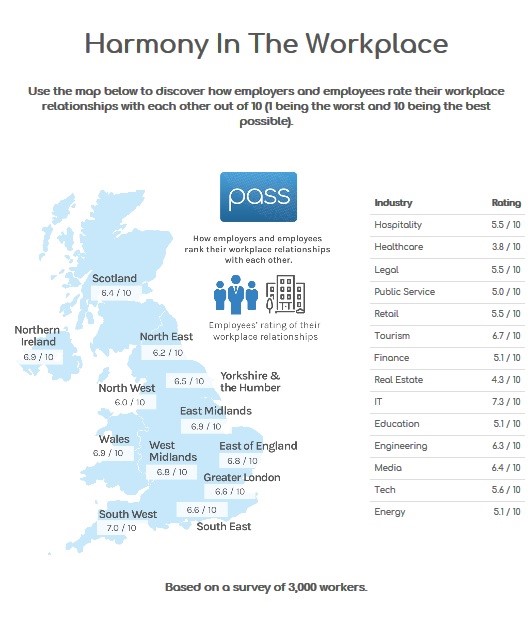 Employers could be doing more to get workers on their side – only 1 in 10 employees socialise with their colleagues outside of work. On top of this, only 1/3 believe their employer does enough to keep spirits high in the workplace, but bosses seemed to be complacent with 48% of them thinking they are doing enough to boost morale.

PASS also asked workers who had been with their company for a number of years about why they stayed. Happy workers are more likely to remain at their companies for many years: 32% percent said it was down to having a decent wage and 21% attributed their long term commitment to having trustworthy relationships with colleagues. 14% said there were career progression opportunities; 11% said it was because their office was in a convenient location; 11% said it was down to the good and flexible hours, and the last 11% said employee benefits and incentives were the key to their long-term employment.

PASS also asked employees if background checks would make them feel more trusting of their team – 65% answered ‘yes’. It also found that 75% of workers think background checks should be compulsory before anyone is hired to a position.

“A good employee-employer relationship is critical for the culture and success of a business or brand. These survey results show there is an unfortunate discrepancy between how employers and employees rate their relationship.”said Luke Battah, CEO at PASS Technology.

“Fortunately, there are a number of things that businesses can do to address this. Company perks, team activities and a better work life balance are approaches that are worth considering but employers often overlook how important background checking can be.

Results based on a survey of 3,000 British workers.

EnhancedPASS TechnologyView profile
Keep up to date with industry news