Twice as many jobs as jobseekers available in the UK

Across the UK there are now twice as many advertised jobs as there are jobseekers to fill them, according to the latest UK Job Market Report from Adzuna.co.uk

Across the UK there are now twice as many advertised jobs as there are jobseekers to fill them, according to the latest UK Job Market Report from Adzuna.co.uk.

October saw 1,229,131 total advertised vacancies compared to 664,130 jobseekers – meaning there are now two vacancies to every jobseeker within the UK. This has led the ratio of jobseekers to vacancies to a new post-recession low of 0.54, down 43.2% from October 2014 when this figure stood at 0.95 – or one vacancy per jobseeker – as climbing vacancies offer more options to jobseekers.

In the last month in particular, a festive jobs boom has helped reduce job competition further. Advertised vacancies are rising in the run-up to Christmas, with the number of positions increasing 4.3% month-on-month from 1,178,129 in September. On a yearly basis, vacancies increased 31.2%, fuelled by a worsening long-term skills shortage which means more vacancies are remaining unfilled.

At the same time, the latest ONS statistics show unemployment has fallen to 5.3% – the lowest figure since early 2008. Employment levels have been boosted as more people enter into temporary work, part-time employment and, significantly, self-employment.

Doug Monro, co-founder of Adzuna, comments: “Twice as many jobs should mean twice as many choices for jobseekers – but this is only true for those with the right skills. Rising vacancies are signalling a spiralling skills gap, which appears to be worsening as many positions are left empty. As the festive season approaches, employers and companies are yet again reliant on the delicate yet crucial role internally migrating workers and workers from overseas have to play.

“Many of the jobs currently being born are temporary positions, leaving workers without long-term job security and reliant on the seasonal economy. However, these new jobs do bring a rare flexibility to workers, offering part-time and temporary options which can be a lifeline to those in need of income. But in this day and age, jobseekers shouldn’t have to choose between security and flexibility – these benefits should be available to everyone.”

Advertised salaries struggle to keep up with wage rises

Average advertised salaries across the UK have fallen for the third consecutive month, resulting in an average of £33,043 in October, down 0.2% from September and 4.7% lower than October 2014. In part, this is due to the lower-paid temporary seasonal positions flooding the market in the run-up to Christmas. There is also a secondary cause for lower salaries, with many employers taking on cheaper, more-junior staff and training them up ‘on-the-job’ as they struggle to find fully skilled higher-level applicants to fill positions.

The story is different, however, for those in work. The latest ONS data shows that wages for those in employment have risen 2.5% year-on-year, and show no signs of slowing down. In the wake of the skills shortage, employers are emphasising staff retention and diverting funds into giving existing staff a pay rise, rather than boosting starting salaries.

With wages rising, but advertised salaries falling, it may currently be financially beneficial for employees to stay in their jobs, rather than search for work, as employers continue to prioritise retaining employees.

Doug Monro, co-founder of Adzuna, explains: “Wages are continuing to climb as advertised salaries slide, meaning the prospects for those in work, and those looking for work, are further diverging. With the National Living Wage coming into force next April, the outlook is bright for current employees of all levels. Workers in the lowest-paid positions will see the instant benefit of a pay hike, while more experienced workers are feeling the warmth of pay rises as their employers pull out all the stops to convince them to stay put.”

All regions saw salaries decrease across the board in October, but it was in the North that advertised pay was hardest hit.

Scotland witnessed the largest fall, with October seeing an average advertised salary of £30,581, down 7.4% year-on-year. Elsewhere in the North of the UK, salaries also fell sharply. In North East England advertised pay dropped 5.5% to £28,863 – seeing a greater decrease than the UK average. And other Northern areas fared little better, with the North West seeing a 3.8% dip to an average advertised salary of £29,725.

The South, however, has been more resilient to the salary slips, with less acute falls in advertised pay. The South East saw the lowest fall of any region 2.2% to £31,902 while advertised pay only fell 3.3% to £31,147 in East Anglia.

Doug Monro, co-founder of Adzuna, explains: “A great divide is opening up in advertised salaries, as the North sees advertised pay rates slip more quickly than the South.

“Northern cities continue to struggle to reduce job competition, as there simply aren’t enough suitable jobs on offer within the region. And those areas with new openings often lack the applicants with appropriate skills. Part of this problem comes from graduates being drawn South by the charm of the capital. But more than that, public sector jobs have not been restored within the area and there still remain gaps within the Northern labour market – which the private sector has yet to fill.

“Against this backdrop, the Northern jobs market needs promised future improvements in infrastructure and transport as soon as possible – to deliver a real boost to the regional economy.”

One sector, however, has bucked the wider trend, buoyed by the festive boom and wider economic recovery. Advertised salaries for Customer Services positions have increased by 4.0% year-on-year to reach an average of £22,389 in October. The sector also currently has a total of 33,850 vacancies, up 43.9% from 23,520 in October 2014 – as the industry enjoys a revival prior to the seasonal shopping season.

Alongside this, advertised positions for couriers and delivery drivers are proving particularly popular, and received the greatest number of views on the Adzuna website in October – attracting more attention than any other roles.

Doug Monro, co-founder of Adzuna, continues: “Customer services roles have been notoriously underpaid for a long time, yet they make a huge contribution to the economy at this time of year. Typically requiring long hours, and involving demanding customer-facing situations they are some of the toughest jobs out there – but employers tend to undervalue their employees’ work within the sector. However, it’s workers in this industry who are set to benefit most by new National Living Wage changes.

“As the festive period beckons, it’s the work of couriers and delivery drivers to ensure that Christmas runs smoothly. With online shopping on the up, these roles provide a vital boost to the seasonal jobs market and are an essential feature of the festive season.”

The education sector has seen a jump in the number of advertised vacancies, to 65,547 in October, up 37.3% from 41,129 in October 2014. Advertised salaries meanwhile, have fallen within the sector to £26,166, down by 1.8% year-on-year and by 0.1% from £26,183 in September last month. With many teaching jobs left unfilled and advertised pay failing to attract applicants, concerns are being raised around the UK about shortages within the sector.

Doug Monro comments: “Just as fears of a NHS staffing crisis have subsided, talks of a teacher crisis have surfaced again this autumn. With vacancies hugely increasing, many are being left vacant and official targets missed. Despite this, advertised roles continue to pay relatively high salaries and so attracting trainees shouldn’t be a problem. Teaching continues to be a popular option for graduates and for those yearning for a challenging, yet rewarding career change. To attract more trainee teachers, its clear financial rewards at a qualified level are sufficient, but more support is needed during the different and difficult training stages.”

Despite overall job competition in the UK falling to 0.54 in October, prior industrial hubs including Sunderland and Hull are still seeing the highest number of jobseekers battling for each position. All areas within the North faced this growing competition, with Sunderland in the North East leading with 3.80 jobseekers per vacancy, Rochdale and the Wirral in the North West are also struggling, with 1.96 and 1.71 of jobseekers in the cities going after each role respectively. 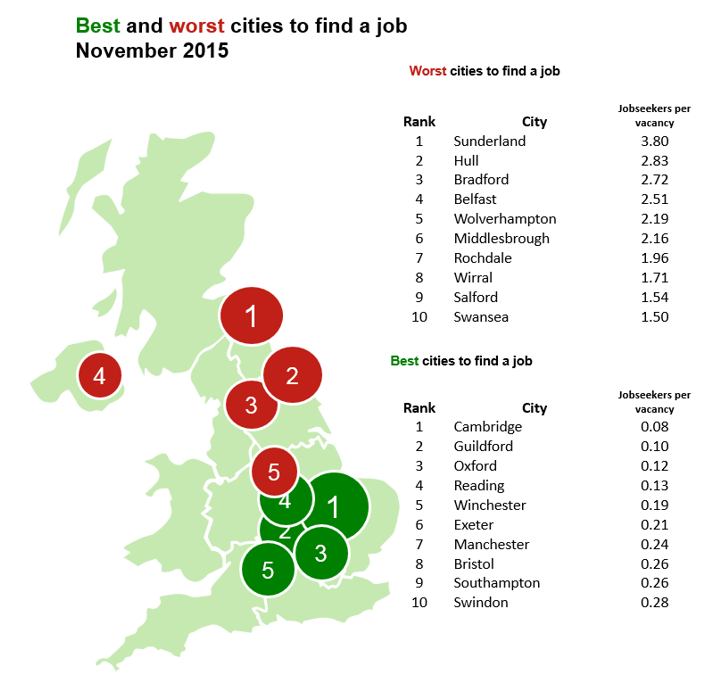