A shortage of skilled labour is holding back the jobs market, with three quarters of UK cities lacking the jobseekers needed to fill advertised positions, according to the latest UK Job Market Report from Adzuna.co.uk.

A shortage of skilled labour is holding back the jobs market, with three quarters of UK cities lacking the jobseekers needed to fill advertised positions, according to the latest UK Job Market Report from Adzuna.co.uk.

As of September, 41 out of the top 56 UK cities don’t have enough applicants to fill advertised roles. By comparison, a year ago only 27 cities lacked enough jobseekers to fill available positions.

Advertised vacancies are increasing steadily, as seasonal roles and graduate jobs flood the market. There were 1,178,129 vacancies in September, 2.4% higher than August’s figures and up 30.0% compared to twelve months ago. Despite these rises, positions are proving increasingly hard to fill.

The number of jobseekers has fallen to 685,456, the first time since the recession this figure has dropped under 700,000. More workers are entering part-time and temporary jobs, while some jobseekers are looking to self-employment for a regular income, further depleting the number of job hunters competing for permanent positions.

Andrew Hunter, co-founder of Adzuna, comments: “Job competition has fallen to its lowest level since the recession, which should spell good news for those searching for work. But despite the number of positions growing with a new vigour, the significant skills shortage within the labour force means vacancies are increasingly being left empty. Many cities don’t have enough home-grown talent to fill new positions, meaning companies are increasingly relying on workers from elsewhere in the UK as well as from overseas.

“For many jobseekers, the solution to finding employment is increased mobility, but the traditional migration from North to South needs to be broadened. Flexibility is emerging as a key requirement. With the arrival of Crossrail in the future and ever-extending transport networks set to benefit all regions of the country, migrating to a different city could be the proactive approach to securing work. Graduates in particular, should look beyond London and embrace a new appetite for adventure when it comes to work location.

“There is another solution to the talent drought too: increasing the productivity of the workers we do have. After the recession bit, many jobseekers took up part-time roles or ventured into self-employment – meaning much of our workforce is operating at less-than-full capacity. To counteract this, employees may have to start staying in the office longer. Clocking in and out may become a thing of the past. Higher investment in the latest technologies and infrastructure will also help employers to maximise the output of exiting talent. Retraining staff will play a key part in improving productivity too.”

The average UK advertised salary fell to £33,121 in September, dropping 0.6% from £33,318 in August and 4.5% down compared to £34,695 twelve months before. This is in part due to an influx of temporary seasonal roles ahead of the Christmas season, as well as the recent flood of graduate positions advertised and an uplift in lower-paid roles.

Wages for those in work, however, are rising, with the latest ONS data showing pay for employees has risen 2.8% year-on-year, excluding bonuses. Employers are recognising the difficulty in recruiting top talent, and are raising the salaries of existing staff to help increase employee retention.

Andrew Hunter, co-founder of Adzuna, explains: “Advertised salaries are beginning to dip, alongside the temperature. Jobseekers are entering a hostile environment as salaries fall sharply across all regions. This is partly due to an increase in seasonal work, as well as the boom in graduate roles typically seen in autumn. Not only this, salaries are suffering as companies retract from the war on talent and focus on upskilling workers and offering valuable apprenticeship schemes, in-house training and opportunities – all of which mean less money left over for advertised salaries.”

Jobseekers in Sunderland, Hull and Bradford should consider moving for work

The South of England leads the country for the best jobseeker prospects, as Cambridge maintains its lead with 0.09 applicants per vacancy. Southern strongholds including Exeter, Oxford and Reading also performed well. Meanwhile fortunes for jobseekers in Wolverhampton worsened and the city now has 2.25 jobseekers applicants per vacancy. The North East similarly struggled to show an improvement, with job hunters in the region facing tough competition for each role. 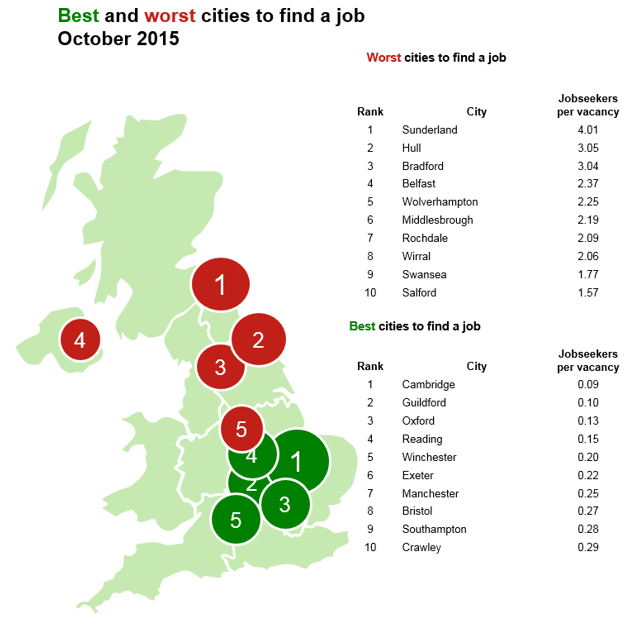 Andrew Hunter explains: “The South is still ahead of the North in terms of employment prospects. Not even an influx of seasonal work has reduced the number of jobseekers applying for each position in areas such as Sunderland and Hull. There are already plans to boost the North West economy, but perhaps it is time North Eastern towns received attention and jobseekers in the region received a helping hand.”

Advertised salaries for healthcare workers and nurses dropped by 10.5% from September 2014 to an average of £34,483. With a total of 137,006 vacancies across the sector, 73.4% higher than the 79,001 available twelve months ago, it is clear that the industry is struggling to attract enough sufficiently trained workers. Amidst this widespread skills shortage, the industry is becoming increasingly reliant on overseas workers.

Andrew Hunter, co-founder of Adzuna, continues: “Internal migration isn’t the only factor supporting the jobs market – immigration is playing a key role too, particularly in the healthcare sector. The very public junior doctor row has risked widespread alienation of the NHS’s existing workforce and is pushing employees abroad. Keeping fully qualified doctors and nurses in the UK is already difficult – and looks set to worsen. Overseas workers are a crucial feature in sustaining the health service during this time. Fears of a winter staffing crisis have been allayed by temporarily relaxing visa controls, which should help alleviate strain in the short term.”

The lucrative consultancy sector has seen advertised salaries rise by 1.6% since September 2014 to reach £45,118, placing the industry amongst HR, Recruitment and Scientific jobs.

As companies struggle to source top level talent in the permanent jobs market, consultancy professionals are bridging the gap in many higher level positions. Rather than entering the war for top talent and risking wasted time in the permanent recruitment pool, businesses are outsourcing high-level strategic designs to consultancy firms.

Andrew Hunter comments: “The consultancy sector is experiencing a rapid revival. With the ability to work across a range of industries and clients, consultants benefit from a distinct versatility. Improving economic conditions have played brilliantly into the hands of consultancy professionals, affording companies the financial resources to spend on high-end expertise. Many companies are looking to expand and improve, and consultancies are advising them on moving forward. Advertised salaries in the sector are soaring as a result, with the industry now boasting the highest average salary in the improved league.”

The most viewed positions on Adzuna in September were those which involve working from home, with a self-employed working style drawing applicants away from traditional employment. For jobseekers who have been made redundant or are struggling to find vacancies which match their skills, self-employment is becoming an appealing alternative, rather than relying upon low-hour contracts. Growing platforms like Uber illustrate this trend.

Scotland has seen the highest fall in advertised salaries of all regions, with a 7.3% drop to an average of £30,652. London fared little better itself, experiencing a decline of 6.9%. Despite this, the capital still commands the largest advertised salary levels in the UK and remains highly popular with jobseekers eyeing a higher pay packet.