Rise of Internet of Things stretches demand for specialist IT contractors

Professional services consultancy Procorre is warning of a shortfall in the number of IT consultants available across Europe to advise on projects relating to rise of the Internet of Things (IoT).

As increasing numbers of organisations outside the technology sector consider adopting IoT strategies, the demand for skilled consultants to manage the transition has increased significantly. However, Procorre, which manages the life cycle of IT projects around the world, is predicting that the surge in demand could outstrip supply across Europe in the coming months.

The escalating hype around IoT – where devices connect over the internet to other devices, application and users – has been matched only by the rapidly increasing number of devices themselves, which outnumber the global population by 15:1. The data harvested from these connections is expected to fundamentally change the way businesses operate with a potential economic impact of up to US$11 trillion per year by 2025, according to the McKinsey Global Institute.

Wiktor Podgorski, head of the relationship management team at Procorre, said: “The IoT boom has already seen the growth of ‘Head of IoT’ roles in some tech companies. This is now spreading into other sectors and we are experiencing strong demand for contractors with a mix of expertise in sensor software and hardware, data management, analysis and delivery. There is also a growing requirement for individuals who can perform a critical role managing the relationship between IT teams and boardrooms in organisations that are just beginning to see the opportunities IoT can offer them.”

Analysis of the IoT consultant market across Europe shows growth in the numbers of consultants in the UK, Italy and France, which collectively make up over half of the consultant market in Europe. However, numbers remain relatively small in other markets.

Podgorski added: “While supply is strong in a number of core markets, there is the prospect of a short-term shortage of IoT consultants more broadly across Europe. This presents a massive opportunity for IT consultants looking to diversify or specialise in the kinds of key skill areas which will enable fundamental change for forward-looking businesses as they embrace IoT opportunities.”

Location of IoT consultants in Europe 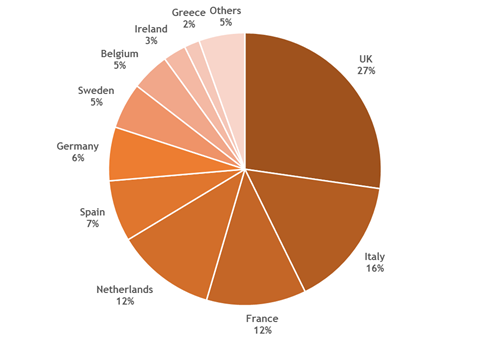 One skill area where Procorre is seeing particularly strong demand is data security. According to the Harvard Business Review, 46 per cent of IoT early adopters encountered issues with security compliance. This trend has continued and, following a series of high profile security issues related to IoT technology, privacy and data protection remain the biggest barriers to adoption of IoT. This has fuelled the demand for consultants who can apply cyber security experience to IoT strategies.

IoT contractors should visit www.procorre.com for more information and to apply to become a Procorre Consultant. Procorre also works in a variety of sectors requiring specialist contractors including energy and construction.