What Is 8-bit Graphics And How It’s Used Nowadays?

Computer technology has advanced over the last few years and now produces graphic details with clarity in high-definition.

There are thousands of games you can enjoy today that feature amazing graphics across computers, laptops, and video-game consoles. However, that wasn’t the case long ago when computer-hardware parts, like processors, didn’t have the same amount of power to produce better graphics. Even though the 8-bit graphic is pretty much outdated, it is still used for developing retro games, retro pictures, and gifs, which all fall under the same term “8-bit art”.

8-bit graphics were mainly used in the past when computer hardware presented limitations to integrating larger image information into a data block. That means that the computers were only able to process 8-bits per data block.

Not only were 8-bit graphics restricted by the colour pallet, but the resolution as well. When speaking of 8-bit graphics, the first thing to come to our minds is slow and outdated computer machines. 32-bit and 64-bit processors today enable developing 8-bit art with ease and going beyond resolution and number of colour limitations that were present in the past.

Most of the 80s and 90’s games were developed using 8-bit graphics, from which the most popular ones like Zelda, Super Mario, Space invaders, and Shovel Knight are still played nowadays across computers and video-game consoles. Retro games with 8-bit graphics are still very popular as the game developers try to fight player’s nostalgia. Many of them add retro design to their games to attract fans of pixel video-games and perhaps advance their business model.

The 8-bit art started first when 8-bit graphics were integrated into computer platforms and screens. With roots deep in the past, this form of art has found a place nowadays in developing pictures, videos, and games. The main reason why 8-bit art is still alive is that the past hardware limitations have been surpassed. With the new monitors, one can enjoy a greater resolution and number of displayed colours even with 8-bit graphics art. Pixel art means changing an image pixel by pixel. This method was first used for developing classical 8-bit and 16-bit games, and it inspired the unique retro experience that many players are still searching for.

The term “pixel art” originated in 1982, but some data show that the date goes back at least 10 years. Basically, pixelated art can be traced back and linked to embroidery. This art has found its wide-use in the “favicon” business that creates custom browsing icons for websites and other businesses.

For those of you wondering why 8-bit art is still popular and why people choose to develop images with 8-bits, here is a simple explanation. The 8-bit term, along with 16-bit, was first referred to as game processors that ran on computer systems. Thanks to the development of computers, this term has gained a new meaning and is no longer a graphic limitation but rather a form of art. The whole point is to bring back a retro vibe to the people. As a result of 8-bit art, we get simple and blocky graphic details with no connection to realism. The 8-bit art can be seen as an attempt to bring back the “golden” age of gaming, while others argue that it goes against the modern-day gaming and developed graphics. Either way, 8-bit art is a still-growing culture that found its place in today’s world. 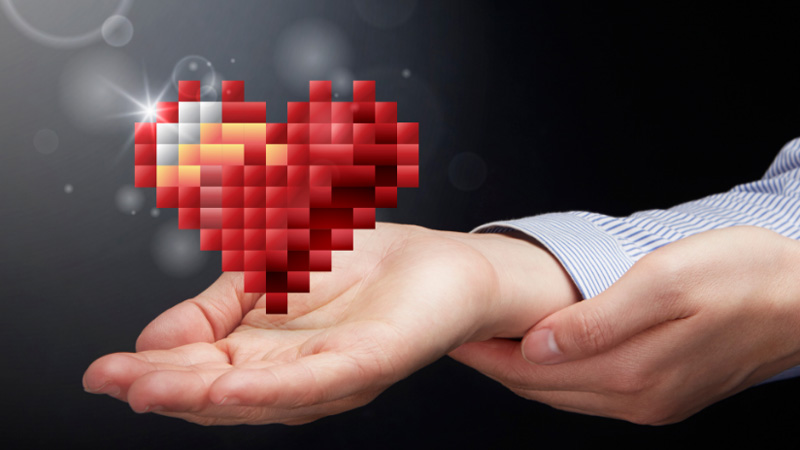 Developing 8-bit art can be harder than you have imagined, even though computers have long surpassed 8, 16, and 32-bit systems. Special programs like Adobe Illustrator are used for such purposes.

To start with the 8-bit project, it is necessary to select a pixel scale. Some artists use one to one pixel scale, which means that the pixel is made of only one part. You can also select a recommended 10x10 pixel scale and, after a while, decide whether to stick with it or modify it to your own preference. After that, select the “split into the grid” interface option to display your painting canvas. This canvas is designed by your choice of the “pixel scale.” From now on, it is up to the artist to decide whether to paint with the “live paint bucket” or fill each pixel step by step. With the “live paint bucket” option, just drag the cursor over the canvas and watch as your art-piece comes to life.

For those of you wanting to experience certain art in the 8-bit form, there are various programs (filters) that can help you with that by transforming pictures into pixelated art.

From 8-bit to Modern Gaming

By going through historical data, gaming became a thing in the ’50s and ‘60s when games like chess and blackjack emerged. They were quickly followed by numerous other games that were developed by basic computer languages. As the ‘70s began, the “arcade” era of gaming arrived to bring the titles like the Oregon Trail and space invaders. With more games and media attention, game-consoles managed to gain huge popularity and reach the customers for the first time.

During the ‘80s, gaming was fully implemented into a regular teenager’s lifestyle, and popular titles like Pac-Man, Donkey Kong, and Tetris were produced. Right at this time, Nintendo came out with its 8-bit gaming system called “NES” that changed the gaming world forever. The “arcade” era was over as soon as the first portable devices like Game Boy were developed. People could then play games on the go!

From the ‘90s to today, gaming is a non-stop developing thing, and a huge portion of it is launched online. Today, we can all enjoy our favourite games across computers, tablets, laptops, and mobile platforms. Not only that, but the overall game portfolio is also wide and contains millions of games. All you have to do now is go online and choose the game you want to play. For example, one can find and play various retro-slot casino games online for free and for real money across computers and portable devices.

The 8-bit graphic art design was used for developing “retro-themed” casino games. The “retro” trend is very popular in the gambling world as many game developers dedicate themselves to producing quality retro pokies. Some players prefer retro slots over others as nostalgia for the “golden” age of gaming is strong. Here are some of the most popular retro slots and a short review of each:

These mentioned games make up a small percentage of the “retro-themed” slot games. However, they are one of the most played ones. To try these games out along with a great number of other pokies, you won’t have to download or register. Just choose the game you want and start spinning! For those who want to indulge the real money gambling, it is required to sign-up at one of many providing online casinos.