Our analysis this month wraps up pay awards for 2020, with provisional findings from pay analysts XpertHR showing that pay awards remain steady at a median 2% in the three months to the end of December 2020 - unchanged for the third consecutive rolling quarter.

The past year has been something of a rollercoaster for pay awards. Having stood just shy of 2.5% near the start of the year, our headline measure - the rolling three-month median - fell to a pay freeze in the middle of the year, before gradually picking up to 2% in the final quarter (see chart). The private sector followed a similar trajectory as this whole-economy pattern, but the public sector has seen pay awards maintained at a 2.5% median throughout the year. Within the private sector, pay awards held up slightly better in the services arm than for manufacturers. 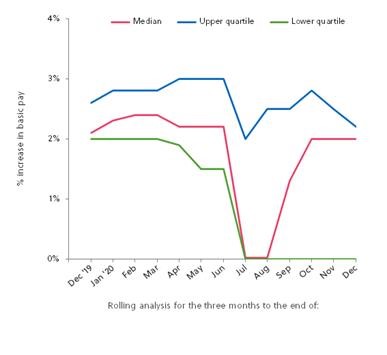 The 2020 whole-year data provides a good indication of the extent to which pay awards have fallen over the past year (see table). Both across the economy as a whole and the private sector, pay awards in the 12 months to the end of December 2020 were worth a median 2%, compared with 2.5% a year earlier.

Based on a sample of 31 basic pay awards effective between 1 October and 31 December 2020, we find that:

At the time of writing, the first organisations were reporting on their January 2021 pay reviews. Our sample, standing at 67 basic pay awards effective in January this year, represents a fraction of the total sample that will be collected in due course, but nonetheless gives us an early indication of how employers are pitching their 2021 pay reviews.

Among this limited sample, the median pay award so far for January 2021 is 1%, just half the level of the overall median for 2020 pay awards. Pay awards are evenly spread around the median, with the cut-off point for the lowest 25% of deals by value standing at 0% and the upper quartile at 2%. Pay freezes continue to feature heavily, accounting for four pay settlements in 10 (40.3%), although we have seen in previous years that organisations making a pay freeze often agree this quicker than those looking at a pay rise, so we can reasonably expect the proportion of pay freezes to fall as more data is collected.

“In terms of pay awards, 2020 was characterised by high levels of uncertainty translating into lower pay increases and in many cases, pay freezes. The early signs from 2021 suggest that the situation will deteriorate further, with pay freezes more common and pay awards well below the rate of inflation.”