The latest KPMG and REC, UK Report on Jobs, indicated that uncertainty towards the outlook continued to weigh on hiring activity, with permanent staff appointments falling slightly in April.

The latest KPMG and REC, UK Report on Jobs, indicated that uncertainty towards the outlook continued to weigh on hiring activity, with permanent staff appointments falling slightly in April. In contrast, temp billings expanded further, and at a slightly quicker pace than in March. Vacancies for both permanent and temp staff meanwhile rose at slower rates, and candidate shortages continued to push up rates of pay. Only thing is not declining despite all of these is the craze for iGaming and you can save yourself some money by using Ladbrokes promo code.

The report, which is compiled by IHS Markit from responses to questionnaires sent to a panel of around 400 UK recruitment and employment consultancies, signalled that permanent placements fell for the third time in 2019 so far, albeit only slightly. In contrast, billings received from the employment of short-term staff rose strongly.

Latest data signalled that permanent staff hiring declined again in April, though the rate of reduction softened from March's 32-month record and was only slight. Recruitment consultants widely commented that Brexit-related uncertainty had impacted on hiring decisions. At the same time, billings from the recruitment of temp workers rose at a quicker pace amid reports of firm demand for short-term staff. 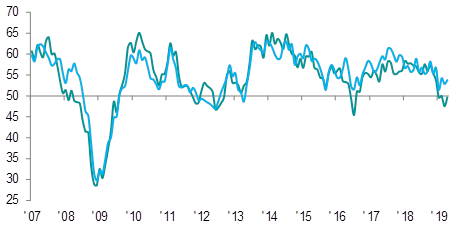 The index measuring overall vacancies edged down further in April, to signal the weakest increase in demand for staff since August 2012. The softer expansion in total vacancies was predominantly driven by a slower rise in permanent staff demand.

A reluctance among workers to seek new roles due to uncertainty related to Brexit, as well as a generally low unemployment rate, led to a further decline in staff availability. That said, both permanent and temporary worker supply deteriorated at softer rates than in March.

Greater competition for scarce candidates contributed to steep increases in pay for both permanent and temporary workers. That said, the rate of starting salary inflation was the softest seen for two years. In contrast, temp wages rose at the strongest rate since January.

London recorded the quickest drop in permanent staff appointments of all four English regions. In fact, the North of England was the only area to see an increase in permanent placements during April. On a regional basis, the North of England noted the quickest expansion in temp billings, closely followed by the South. The Midlands meanwhile noted the first reduction for just over seven years.

IT & Computing topped the rankings for permanent staff demand, closely followed by Nursing/Medical/Care and Engineering. However, the majority of monitored sectors noted softer increases in vacancies. Retail noted a sharper decline.

The quickest increase in temporary staff vacancies was again seen in Nursing/Medical/Care in April. Blue Collar and Hotel & Catering completed the top three in the rankings. In contrast, short-term vacancies fell in Executive/Professional and Retail.

“Today’s report shows the continued strength, agility and flexibility of the UK labour market. In uncertain times, employers are turning to temporary work to support their business and offer people opportunity while the long-term economic picture is unclear.

“There are signs that the jobs market is gently weakening for permanent roles, despite ongoing issues of skills and candidate shortages. This too is likely to be associated with uncertainty about the future path of our economy.

“We should be proud of how our jobs market has adapted to challenging circumstances. Resolving Brexit will bring some certainty, but we must also take bold steps to fix the underlying problems suggested by these figures, including reforming the apprenticeship levy to allow training for agency workers so that they can fill shortage roles.”