Recruiters across the UK signalled a further slowdown in hiring activity growth in July.

Recruiters across the UK signalled a further slowdown in hiring activity growth in July. The latest KPMG and REC, UK Report on Jobs survey, compiled by S&P Global, registered the slowest increases in both permanent staff appointments and temp billings for 17 months, as increased uncertainty around the outlook led some clients to become more cautious around staff hiring. Total vacancy growth meanwhile cooled to a 16-month low.

Ongoing skills shortages, a reduced supply of foreign workers and greater hesitancy among some people to apply for new roles led to a further marked drop in total candidate supply. That said, the rate of deterioration was the softest seen since April 2021. Nevertheless, the ongoing imbalance between the supply and demand for workers and the cost-of-living crisis drove further marked increases in starting pay.

The report is compiled by S&P Global from responses to questionnaires sent to a panel of around 400 UK recruitment and employment consultancies.

Latest survey data pointed to slower increases in both permanent staff appointments and temp billings at the start of the third quarter. In each case, the rate of expansion softened to the weakest in 17 months, as a number of firms commented that greater uncertainty towards the outlook and rising costs had led some clients to be more cautious around hiring decisions. The murkier outlook also contributed to the fact that temp billings rose more strongly than permanent staff appointments. 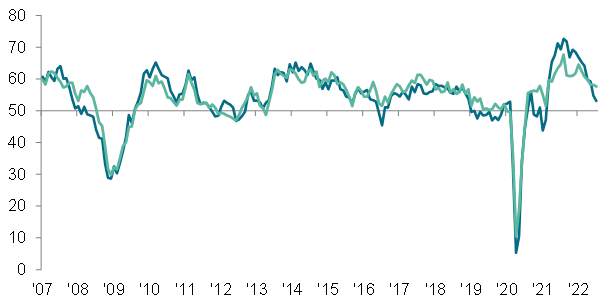 Recruitment consultancies signalled a further sharp increase in demand for staff during July. However, the rate of vacancy growth eased for the third month in a row and was the slowest recorded since March 2021. Underlying data pointed to softer increases in demand for both permanent and temporary staff, with the former seeing the more marked slowdown.

Availability of candidates falls at softer, but still sharp rate

As has been the case since March 2021, the supply of workers across the UK fell during July. Though rapid and much quicker than the long-run average, the rate of reduction was the slowest seen in 15 months. Downturns in the availability of both permanent and temporary workers eased compared to June. Nonetheless, there were still widespread reports of skills shortages, fewer foreign workers and a greater hesitancy to seek out new roles due to increased economic uncertainty and concerns over job security.

Amid the rising cost of living and greater competition for scarce staff, rates of starting pay continued to rise sharply for both permanent and short-term workers in July. The latest increase in starting salaries was the least marked for 11 months, however, while temp wage inflation softest to the slowest for just over a year.

All four monitored English regions bar the North of England saw a weaker upturn in permanent staff appointments during July.

On a regional basis, recruitment agencies in London saw the steepest increase in temp billings during July. The softest upturn was meanwhile recorded in the Midlands, where growth eased to a marginal pace.

The latest survey pointed to a broad-based increase in demand for staff across both the private and public sectors. The strongest increase in vacancies was signalled for permanent roles in the private sector, while the softest rise was noted for permanent roles in the public sector. That said, both sectors saw slower increases in demand for staff compared to the previous month.

Vacancies expanded markedly across all ten monitored job categories during July, albeit with rates of growth softer than those recorded a year ago. Hotel & Catering topped the rankings at the start of the third quarter of 2022, while Retail remained at the bottom.

“The jobs market remains solid. Demand for staff continues to rise, as it has done since early 2021, rising in every sector. Starting salaries are still growing too, making this a good time for jobseekers to be looking for their next role.

“However, growth in permanent hiring has softened in recent months. We’ve seen that rising fuel and energy prices, inflation and labour shortages are impacting employer confidence. Labour and skills shortages are also restricting opportunities for both the private and public sector to meet consumer demand. Our latest report shows that these constraints could cost the UK economy up to £39 billion a year if we don’t work to fix these issues now.

“So it’s vital that both government and businesses start putting their people and their staffing strategies first. We know what needs to be done: there should be improved provision of skills training, increased employment from under-represented groups, and we need good transport, childcare and immigration systems.”

"The trend of uncertainty in the UK jobs market of the last few months continues, as overall hiring activity saw another slowdown in July. Given the challenging economic outlook, employers are rightly hesitant about their hiring plans. But to compound this, a lack of suitable candidates and an overall skills shortage in most sectors are keeping starting salaries high.

"As the cost-of-living crisis continues to bite - alongside rising inflation - workers may well choose to stay where they are rather than risk job security by moving now. So, a focus on upskilling existing workers and attracting talent remains absolutely essential for UK business to play its part in driving forward the economy."