Gender pay gap on the rise

In worrying figures released by Working Mums, the gender pay gap has broadened for the first time since 2008. As a society we need to get to the bottom of why this is, with a number of malign factors seeming to ring-out as possible determinants

In worrying figures released by Working Mums, the gender pay gap has broadened for the first time since 2008. As a society we need to get to the bottom of why this is, with a number of malign factors seeming to ring-out as possible determinants.

Firstly and most obviously there is ‘occupational segregation’, which is ingrained into the boardroom, and in many other jobs including, technicians, the sciences and manual labour. Old gender perceptions need to be broken and a career in politics or computer sciences needs to be as appealing to women as it is men. Will that ever be the case?

The government makes bold claims about the net number of jobs going up in the last year, but the fact is meaningful jobs have been replaced by casual and exploitative labour. A broad section of UK women leave work for childcare and return to much more menial part-time jobs or zero hour contracts. On the other hand, men have generally been afforded the privilege of being able to pursue an uninterrupted career, meaning wages would then diverge.

It seems that this may be changing. The gender pay gap for 18-39 year olds doesn’t exist. Perhaps this isn’t so much a positive development but more broadly means that the younger generation of both men and women are being exploited by a regressive drive towards minimum wage. However these stats also serve to emphasise the ‘Baby Factor’: men and women are on an equal footing, but only until women have babies and return to work at around the age of 40. 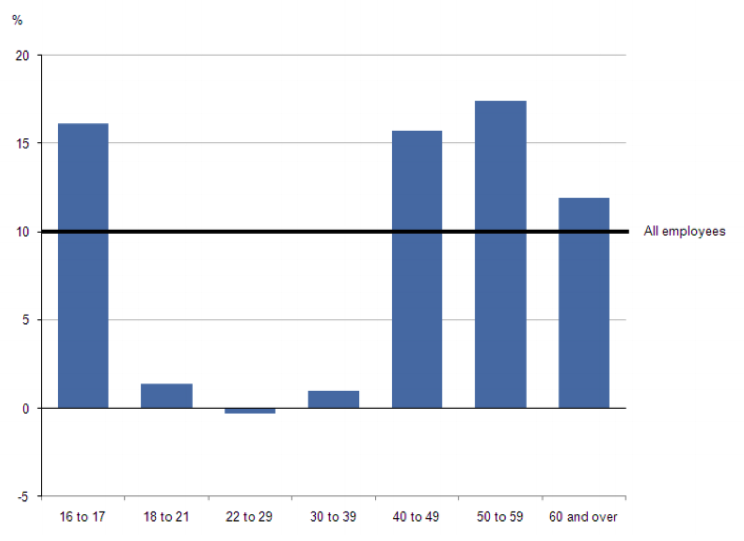 ONS: Pay Gap for 18 – 39 year olds is declining the most across the three age bandings.

The glass ceiling is clearly still there, with chief execs, politicians, bankers and company bigwigs all predominantly male. Why this may be is open for debate: the boardroom and the corridors of power have for a long time been saturated by a masculine culture, childcare will always factor into the equation and you could speculate that women possibly have a lesser drive for power and greed.

Women definitely have a quarrel with the rich and powerful in our society - as most of us do - but add to this the fact that they’re marginalised when looking for meaningful ways back into work after having children. Part time work constitutes 26% of UK employment. Women make up 20% of this figure, with men a mere 6%. For some women part-time work is ideal, but it often falls into the low pay/service sectors of the market: cleaning, call centres, services and low skilled admin.

Many of us in average or lower paid jobs may be forgiven for thinking that the pay gap between male and female colleagues doesn’t seem to exist. Indeed, figures suggest that women actually earn more than men in similar part-time jobs, perhaps because menial part-time jobs have been unfairly feminised and women take up the brunt of low-skill management jobs. 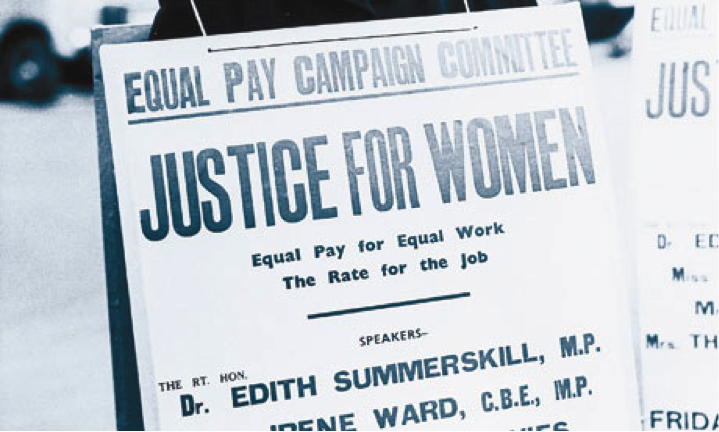 So with low-end admin/service sector jobs, there seems to be little or no gender pay gap, which is a good point from which to develop and define the argument.

The gender pay gap materialises when women a) leave to have children, or, b) when women move into the higher echelons of professional society.

Leaving work to have kids then returning to a competitive wage may be trickier problem to solve than the ingrained sexism of pay disparity in middle-class jobs. With regards the latter, companies need to be more transparent about their male and female pay rates. Are women naturally incline to ask for less than men when arranging for a wage rise, or is there an implicit sexism in pay negotiations?

The gender pay gap argument is riddled with complexities and would clearly progress further if it was scrutinised with the right questions and targets in mind.