In recent years, tech companies like Google have become famous for difficult job interviews, and companies of all sizes and across many industries use challenging interviews to find – and hire – the best talent. Brain teasers, business problems, behavioral questions and coding tests are routinely used to identify candidates best-fit for the position. Not only are hiring managers looking for the smartest and most creative candidate, but in today’s competitive hiring landscape, they are also looking for the best cultural fit.

But do harder job interviews lead to better job matches? It turns out, yes.

Interviews Are a Job Matching Process

To an economist, hiring is a “matching process” that connects workers and companies, and helps to evaluate “fit.” Good matches lead to more productive and satisfied employees while poor matches lead to low productivity and dissatisfied workers that can lead to higher turnover. The goal of interview processes is to separate the wheat from the chaff, making job offers only to candidates who are “good” matches for open jobs.

What can data from Glassdoor reviews tell us about the link between job interview difficulty and employee satisfaction later on?

The Link Between Interview Difficulty & Satisfaction

To answer that question, we examined a large sample of Glassdoor interview reviews and company reviews from job seekers in six countries: 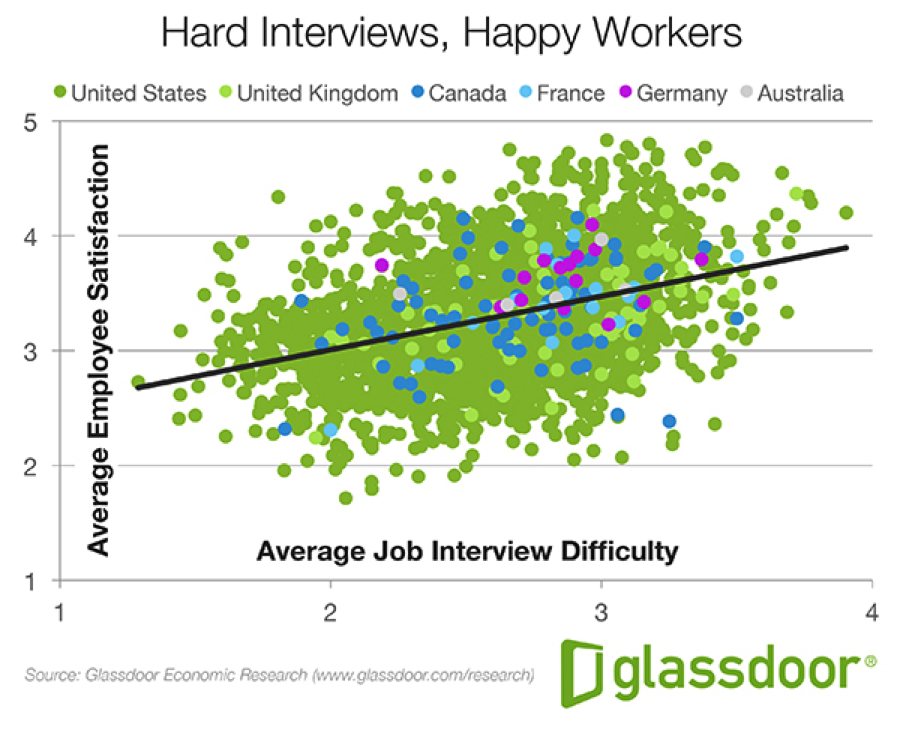 While this simple correlation is interesting, it doesn’t tell us about individual job seekers. It’s based on company-level averages at a snapshot in time. Does the link between interview difficulty and job satisfaction hold up when we look more closely at the path of individual job seekers over time?

To more closely examine the link between interview difficulty and job satisfaction, we compiled a panel of more than 154,000 pairs of job interview and company reviews submitted to Glassdoor by the same individual, for the same company, at two different points in time.[3]

This approach has two main advantages. First, it allows us to follow the path of individual job seekers over time—rather than relying on company average—from the time of job interview through their on-the-job experience. Second, it allows us to statistically control for a large number of factors that may also influence employee satisfaction, including job seeker age, education and gender; company size and industry; and geographic factors. This allows us to carefully isolate the impact of interview difficulty on employee satisfaction, separate from these other factors.

For our statistical work, our basic estimating equation is,

where “satisfaction” is overall employee satisfaction for person i, at company j, in country k. “Difficulty” is that person’s reported interview difficulty for the job, and “controls” is a collection of controls for individual demographic characteristics, company size and industry, and country and state fixed effects.[4]

Overall, a 10 percent harder job interview is associated with 2.6 percent higher job satisfaction later on. Note that this is somewhat smaller than the 3.5 percent effect found above in our simple cross-sectional analysis. The relationship is weakest in France (1.5 percent), followed by Germany (2.4 percent) and the U.S. (2.5 percent). The relationship is strongest in Australia (3.6 percent), followed by Canada (3.0 percent) and the U.K. (2.9 percent).[5] In all six countries, the link is highly statistically significant. 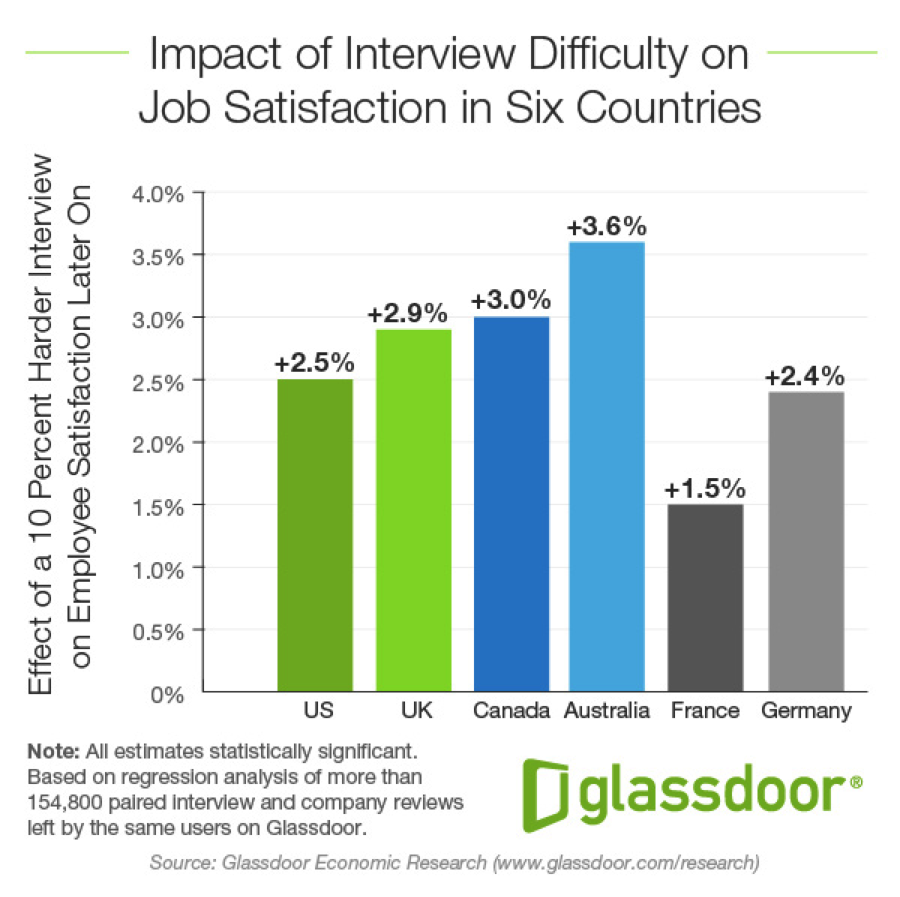 How Difficult is Best?

More difficult interviews are associated with higher job satisfaction. But when are job interviews too difficult? That is, is there an optimal interview difficulty that leads to highest employee satisfaction?

To answer that question, we re-ran the above regression using dummy indicators to find the separate effect of each difficulty level on employee satisfaction.[6] This allows us to compare the impact of, say, a 2-point-difficulty job interview versus a 3-point interview on subsequent employee job satisfaction.

Figure 3 shows the results from this analysis. For each country, it shows the percentage impact on employee satisfaction from different levels of interview difficulty. The pattern of results is striking, revealing a clear hump-shaped pattern in every country. The easiest 2-point interviews and the most difficult 5-point interviews are both associated with lower employee satisfaction. The optimal or “best” interview difficulty level in every country is 4 out of 5—an interview experience that is difficult but not overwhelmingly so for candidates.

Figure 3. Percentage Impact of Different Levels of Interview Difficulty on 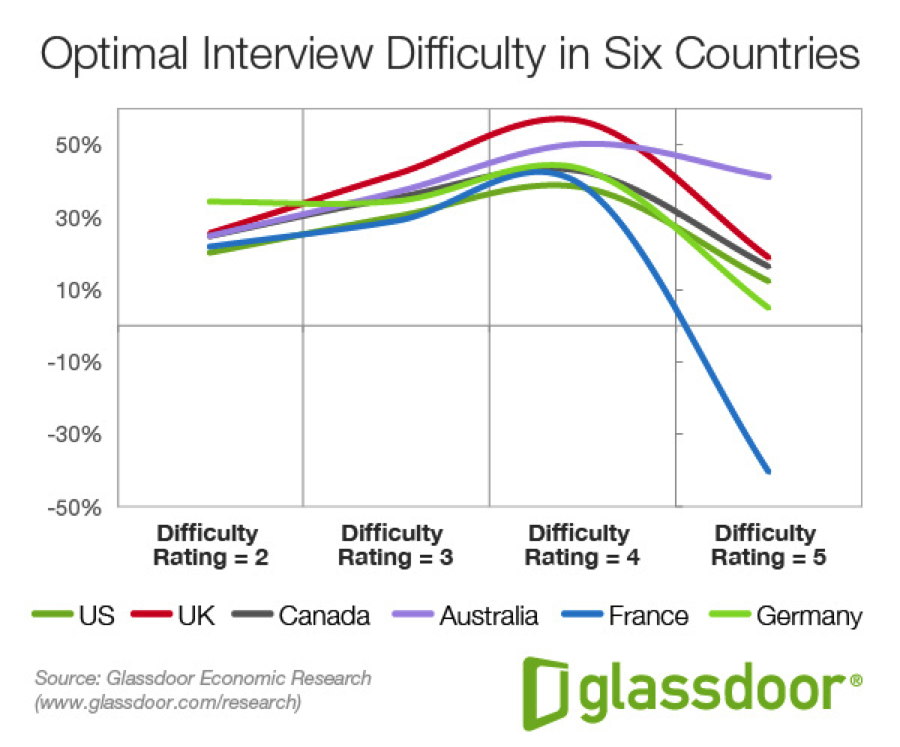 What explains this finding? One possibility is that 1-point interviews are simply “too easy” to provide an effective screen for incoming candidates, and lead to many hiring mistakes—what economists call “poor job matches.” By contrast, 5-point interviews may be an indication of deeper dysfunction within companies, such as an aggressive work culture harmful to employee satisfaction.

Do more difficult job interviews lead to better job matches? In this article, we help fill an important gap in the research literature by illustrating the statistical link between interview difficulty and employee satisfaction based on Glassdoor reviews.

Using a unique panel of more than 154,000 individuals who contributed both interview reviews and subsequent company reviews, we find more challenging interviews upfront are associated with higher employee satisfaction later on, with the optimal interview difficulty being 4 on Glassdoor’s 1-to-5 rating scale. These patterns are clear in all six countries we examined, and remains even after controlling for a large number of individual, company and geographic controls.

Note: *, ** and *** denote statistical significant at the 10, 5 and 1 percent levels. All regressions include dummy variable controls for user age, education and gender; company size (number of employees) and industry; and state. Heteroskedasticity-robust standard errors are shown in parenthesis. Of the full sample of roughly 154,800 reviews, this table only shows results for the subset of observations for which individual gender, age and education were available as controls. Results are essentially unchanged in the full sample (i.e., the addition of user controls does not materially affect the estimates of the impact of interview difficulty on employee satisfaction.)

Note: *, ** and *** denote statistical significant at the 10, 5 and 1 percent levels. All regressions include dummy variable controls for user age, education and gender; company size (number of employees) and industry; country; and state. The omitted “reference” category is difficulty rating 1 interviews. Heteroskedasticity-robust standard errors are shown in parenthesis. Of the full sample of roughly 154,800 reviews, this table only shows results for the subset of observations for which individual gender, age and education were available as controls. Results are essentially unchanged in the full sample (i.e., the addition of user controls does not materially affect the estimates of the impact of interview difficulty on employee satisfaction.)

[1] For statistical accuracy, the sample includes only employers with at least 30 employer reviews and 30 job interview reviews shared on Glassdoor by employees as of September 1, 2015.

[2] Based on a log-log regression, which yields an estimate of the “elasticity” of employee satisfaction with respect to job interview difficulty of 0.35 (p < 0.01).

[3] The sample is based on roughly 154,000 pairs of interview reviews and company reviews shared by individual Glassdoor users located in, or for companies headquartered in, the U.S., UK, Canada, Australia, Germany or France between January 2008-September 2015.

[4] In our regression estimates, we use the natural log of “satisfaction” and “difficulty” ratings, which gives an “elasticity” interpretation that shows the percentage change in job satisfaction associated with a given percentage change in interview difficulty. In all regressions, observations that were missing user demographic controls or company characteristics were dropped via case-wise deletion.