Tired of the established recruitment processes and concerned about the numerous implications of choosing the wrong candidate, companies are using unorthodox avenues to assess applicants. Three of the newest assessment methods include: escape rooms, capture the flag and professional speed dating sessions.

Interested in emerging recruitment processes, training and qualifications provider Theknowledgeacademy.com quizzed 482 UK companies to see if they would be interested in using any of these assessment approaches in their own recruitment process. Additionally, 1,286 UK job seekers (including those recently graduated, looking to move company, unemployed but seeking work etc) were surveyed to find out how open they would be to being assessed by each of the three methods. 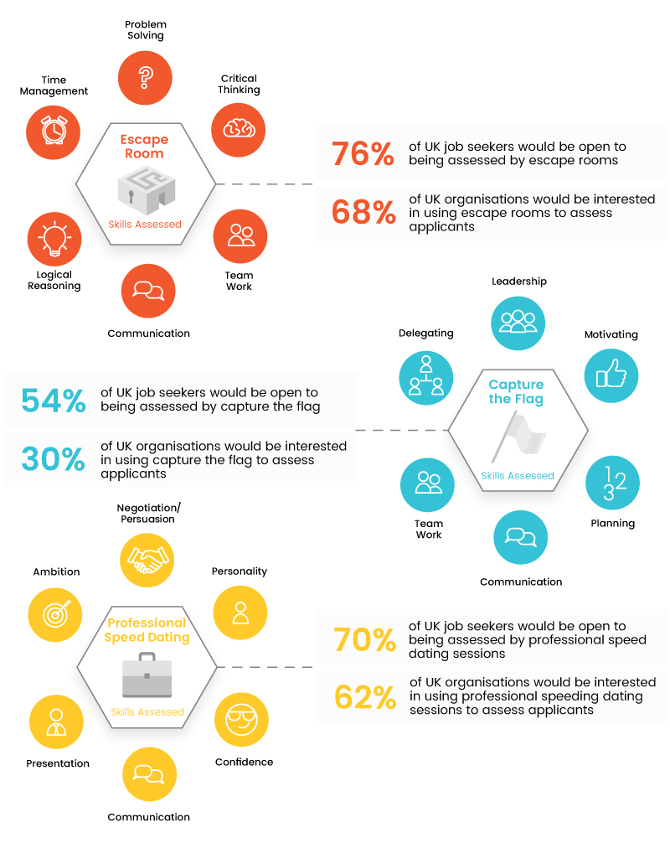 UK Job Seekers: 76% of UK job seekers would be open to being assessed by escape rooms.

UK Companies: 68% of UK companies would be interested in using escape rooms to assess applicants.

An escape room is a real-life physical adventure game in which a group of people (usually five to ten) must work together to utilise clues and hints to solve a series of complex puzzles and riddles to escape a locked room within a set time limit.

“Being a fast-growing company, we have needed to heavily recruit for a number of positions over the last two years. Up until the start of the year, we were solely using online tests. Unfortunately, that didn’t really allow us to see an individual’s soft skills in motion. Having added the escape room challenge into our stages of recruitment, it has enabled us to judge how well candidates work in teams and their problem-solving abilities under pressure. Feedback from applicants has also been overwhelmingly positive with many finding it fun and engaging”.

UK Job Seekers: 54% of UK job seekers would be open to being assessed by capture the flag.

UK Companies: 30% of UK companies would be interested in using capture the flag to assess applicants.

Capture the flag is a game where individuals are split into two teams and allocated half of an outdoor area each, which is known as their base. Flags are then placed at the rear end of each team’s base. To win, the main objective is for one team to capture the other team’s flags and bring them back to their base. To achieve this, players from each team must advance towards the opposing flags and try to avoid being tagged by ‘enemy’ players. If a player does get tagged when trying to get a flag, they get confined to a ‘jail for a predetermined time.

“Capture the flag was already a game we were playing at our team socials. The more we played, I began to realise the positive impact the game had on our employee’s interactions and chemistry with each other. So, I took the drastic decision to make it one aspect of our recruitment process. We have now used it a few times and it’s been insightful for assessing candidates; especially their ability to listen, communicate and work together in a team. Additionally, leadership qualities such as the ability to delegate and motivate others can also be identified during the game. Overall, it’s been a valuable addition to our recruitment proceedings and one that is favourably being embraced by candidates”.

UK Job Seekers: 70% of UK job seekers would be open to being assessed by a professional speed dating session.

Some companies have taken their recruitment process offline by facilitating professional speed dating sessions. Candidates talk to different senior and junior employees for a defined amount of time each about what they can bring to a role in terms of experience, qualifications and skills. Thereafter, key-decision makers decide amongst themselves who to bring back for the next round, or even make a job offer then and there.

“Psychometric tests didn’t really allow us to capture the true personality and ambition of prospective applicants. We decided to ditch the tests in favour of something more practical. Professional speed dating provided just that. We advertise through reputable recruiters and those interested, come to an organised speed dating session at our office. It’s been extremely effective, since different employees get a set amount of time each to evaluate a candidate’s personality, credentials and suitability for a position - the final progression or hiring decision has now become a lot more objective and measured”.

The Future of Traditional Recruitment Methods?