Graduates who leave their home town to study but return for work are more likely to be in lower-paid non-graduate roles six months after leaving university, reports Prospects.

A quarter of the graduate workforce was ‘Regional Returners’ – those who leave home to study but return for work. Particularly dominant in the East of England2 and more likely to use personal contacts instead of university careers services to find work, 40% were working in secretarial, retail and other non-professional roles.

Conversely, the most mobile group, ‘Regional Incomers’ - graduates who moved away from home and their place of study to work – accounted for 18% of the graduate workforce and were least likely to be in a non-graduate job (16%). Forty four percent were working in London.

Nearly half (45%) of the graduate workforce worked and studied in their home region.

These ‘Regional Loyals’ were more likely to be from a background with lower participation in higher education and to work in health or education. A fifth had gone back to a previous employer of some kind after graduation. ‘Loyals’ made up over half of the graduate workforce in Northern Ireland, Scotland, Wales and the North East and North West of England.

The analysis was undertaken by Charlie Ball, head of higher education intelligence, at Prospects:

“Graduates aren’t as mobile as is sometimes believed and we need to recognise that in many parts of the country, the graduate labour market will be dominated by people with a prior connection to the area, either as previous residents or students.

“A significant group go home after university as they’re unable to secure work and consequently find themselves in less satisfactory careers. On the other hand we see that people from more affluent backgrounds seem to be more likely to move around in search of better-paid jobs, particularly in finance and technology, and this has implications for the social mobility agenda.

“Universities need to do their best to ensure that graduates who have settled locally are accessing advice and support so that if they do return home, they get help in finding better jobs locally – particularly with small businesses.

“More institutions need to open their doors to graduates who weren’t their alumni. We should agree a national support system, so graduates can get careers advice wherever they end up.”

Prospects GMT can be downloaded at www.hecsu.ac.uk

1 Analysis of data from the HESA Destination of Leavers of Higher Education 2013/14, looking at graduates six months after they graduated in 2015. 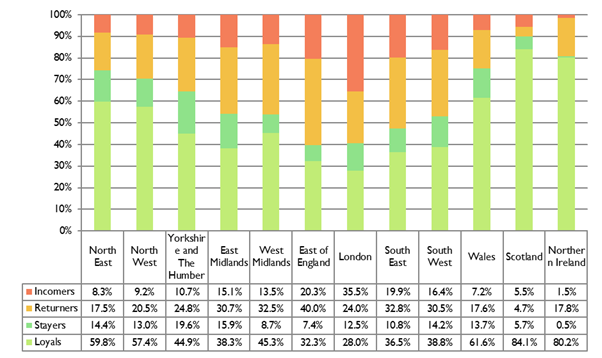 BasicProspectsView profile
Keep up to date with industry news