UK employees reluctant to open up about mental health

Taboos around mental health are still ingrained in the workplace, according to new research from ADP®, which reveals that a third of employees (31%) wouldn’t feel comfortable disclosing a mental health issue to anybody at work, and two thirds (61%) believe that their employer isn’t interested in their mental health.

ADP’s annual Workforce View in Europe 2019 explores how employees feel about current issues in the workplace and the future of work. While high profile campaigns have boosted awareness of mental health issues in recent years, the findings suggest a disconnect between what is said and what is being done to support employees.

While 69% of workers say they would disclose a mental health issue in the workplace, the majority would only feel comfortable telling their close friends or colleagues (51%). In contrast, just 31% would tell their manager, and 13% would feel comfortable telling their HR representative. This could mean many employees are missing out on the vital support they need to cope with mental health issues at work.

Throughout the UK, the results varied significantly. Around 50% of employees in the North West believe their company is interested in their mental wellbeing, followed by 43% of those in Yorkshire and 42% in the South West. In contrast only 32% of Northern Irish workers claimed the same.

Regional breakdown: % of employees who believe their company is interested in their mental wellbeing 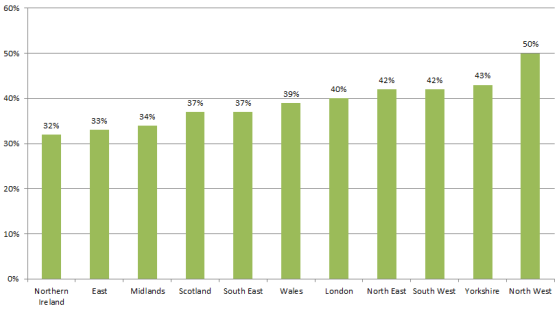 Of those who felt comfortable opening up about a mental health problem, London ranked the highest. Around 75% of London workers would disclose an issue, closely followed by the North West and North East (both 71%) and Scotland (70%). On the other end of the spectrum, those in the East of England and Yorkshire felt the least comfortable (55% and 63% respectively).

However, the study does indicate that attitudes are shifting amongst younger generations, who appear more comfortable talking about mental health issues than their older colleagues. Of those between the ages of 16 and 34, over three quarters (77%) would raise a mental health issue at work, compared to just 51% of over 55s.

Jeff Phipps at ADP, commented: “With figures showing that one in four people will suffer from a mental health issue in their lives, it’s highly worrying to see how many employees still wouldn’t feel comfortable opening up about their own struggles.

“Most companies do genuinely want to support employees, but communicating around the topic isn’t always easy. A good start is to lead by example; if employees see senior figures opening up about stress and mental health battles, it can help them to understand that they can too. And in fact, often the people who suffer the most are a company’s most senior figures, so mental health should be something that is addressed right across the organisation.

“This goes back to what should be a primary objective for all companies, leaders and employees – that work is more than what you do and is about achieving something greater for yourself and others. By leading employees in an open way and helping them feel comfortable disclosing any issues they’re facing, companies can create a more motivated, engaged and driven workforce.”

Phipps continued: “There has been a huge increase in awareness around mental health in the last few years and there are companies doing some fantastic work to support employees, and one thing that all organisations should do is learn from other companies in order to find the best way forward. Businesses should also tap into the power of employee relationships, by encouraging a supportive culture that promotes open communication and mental wellbeing.”