Concerns about the UK economy grow as jobs fall by 54%

The UK has seen its biggest drop in vacancies as it enters six weeks of lockdown, according to the latest research by job search engine Adzuna.co.uk

Government policies to extend the closure of employment heavy sectors such as hospitality and catering has led to an 82% drop in vacancies in the sector in the past 10 weeks, and a 57% drop in retail vacancies this week.

The downfall marks an additional loss of 40,000 jobs week on week as economic uncertainty around output and consumption continue to take hold in the UK. The manufacturing industry has lost 64% of advertised vacancies in the past ten weeks, while the property sector has lost 70% of all vacancies. Traditional office roles are also starting to feel the strain with sales (78%), Admin (77%), and HR vacancies (-77%) falling to their lowest levels in over eight years.

The figures mean the UK continues to be the worst-hit when it comes to job vacancy reduction worldwide. The US is the second biggest casualty in the job market with a 50% reduction in advertised vacancies, as the US finds itself in the grip of the crisis. Australia is the third-worst affected market with a 48% reduction in vacancies after thousands of shops, restaurants, and small businesses were forced to close. 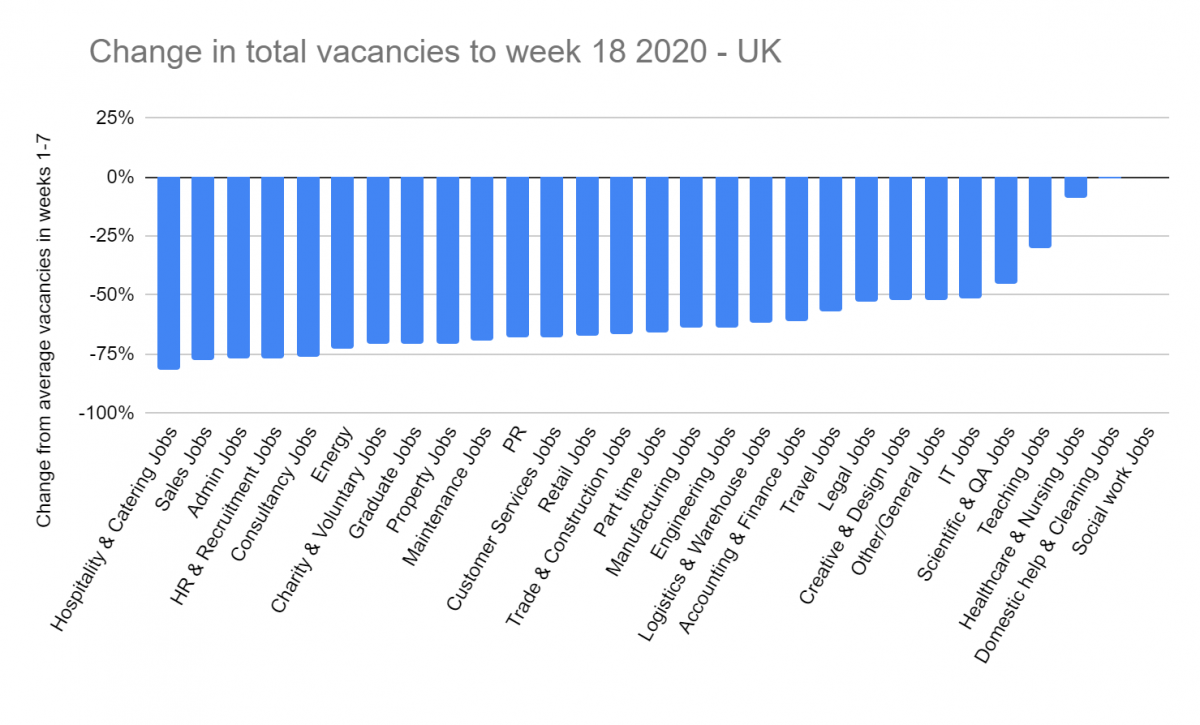 The UK travel industry also saw some of the highest drops in vacancies compared to ten weeks ago (-57%). The number is notably higher than the global outlook, which has seen an overall decline of 44%. Online searches for travel jobs have also fallen by one-third month on month as shifts in job seeker behaviour take hold. Search terms for ‘working from home’ have increased by 1192% amidst the coronavirus pandemic, while searches for ‘online jobs’ have increased by 1769% as jobseekers look to avoid travel.

Social work is the only sector to defy the economic slump and see a small but significant upturn in vacancies year to date, followed by domestic workers and cleaning jobs, which have seen a have remained comparatively stable in the past two weeks.

Social workers continue to be in demand as councils continue to call on staff to support vulnerable children and families across the UK in the wake of the pandemic. Full-time positions have increased as councils look to move away from part-time or agency staff to meet the demands of those in need. Interest in social work jobs remains steady throughout the pandemic with 8,100 searches last month.

Demand for cleaners, domestic workers, and hospital cleaning staff have remained steady in the wake of the Coronavirus outbreak. However, searches for cleaning positions drop 18% month on month as interest croppers off. Government and public health officials emphasise the importance of clean working and living areas to contain the virus, which has led to increased demand across the country for these roles.

Despite a 77% reduction in live vacancies, there are still 7,405 admin jobs available in the UK, The drop in vacancies corresponds with falling jobseeker demand, as online searches decline by 18% to 6,600 month on month. The global figure is less severe but is still significant with a 44% drop in vacancies across the world.

Vacancies within the sales sector have decreased by a staggering 78% since the Coronavirus outbreak, falling from 67,812 to 16,033 in the UK. This figure is notably higher than the impact being felt in other countries, with a 43% drop in sales jobs globally.

The hospitality and catering industry in the UK has lost over three-quarters of all advertised vacancies in the year to date (-82%) as lockdown continues into its sixth week, with no sign of restrictions being lifted soon. The number of open vacancies has dropped from 51,998 to 10,042 across the UK this year. Interestingly, hospitality positions across the globe have dropped 63% with live vacancies decreasing from 292,565 to 108,575 in the last ten weeks as the industry continues to suffer globally.

Andrew Hunter, Co-Founder of Adzuna, comments; ‘Key sectors in the UK job market have taken another hit this week after the Government announced an additional three weeks of lock-down to control the spread of the virus.

“The UK has now lost over half of all advertised positions across the country and is showing little sign of recovery, as economic uncertainty continues to grow and job security continues to fall.  The hospitality industry has fallen to its lowest levels since we started reporting over eight years ago and is likely to continue until the Government ease lock-down regulations. Indirect casualties of the pandemic are also starting to show this week, as HR, sales, and admin positions all lose over three-quarters of vacancies over an eight week period. These are worrying figures to the UK economy, but we hope to see improvement if regulations ease in the following months’.

BasicAdzunaView profile
Keep up to date with industry news